(iii) Usually have two to four flagella without appendages other than delicate hairs or scales.

(v) Autotrophic, photosynthetic pigments are chlorophyll a, chlorophyll B, carotenes, xanthophylls. Chloroplasts are of various shape and sizes but with never any chloroplast endoplasmic reticulum.

(xvii) Green algae or chlorophycae are ancestors of land plants due to presence of chlorophyll a and chlorophyll b, carotenoid, presence of cellulose and pectin in cell wall, storage of starch, flagella in motile form. 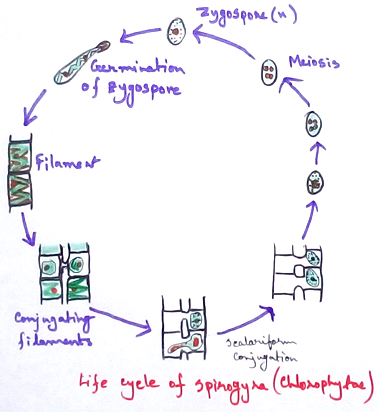 Already six different order (types) of algae currently recognized under chlorophylls. They are -

(iv) Sewage oxidation tank – Chlorella, Chlamydomonus, Scenedesmus are some green algae which causes oxidation of sewage tank and clean up.

Questions and answers on Cholophyceae:

A distinctive set of microtubules lying parallel to the developing cleavage furrow is called phycoplast. Members of chlorophycae exhibit phycoplast.

3. Where do we find walls composed of glycoprotein in green algae?

4. Which is the main carotenoid of green algae?

5. Name a green algae known as source of petroleum.

Botryococcus. It is a microscopic green algae which produces good amount of hydrocarbons projected as a modern day source of renewable energy compound.

7. Name some green algae that are parasitic on higher plants.

From Cholophyceae to HOME PAGE