Morphology - Body of cockroach is dorsoventrally compressed and mathematically segmented. Entire body is divided into head, thorax and abdomen. Head contains pair of antennae, a pair of compound eyes and a pair of fenestrae. Thorax contains three segments. Each bears a pair of legs ,two pairs of wings (which is present on the thorax portion). Abdomen of consists of ten segments. Mouth part consists of labarum, maxillae, mandibles and hypo pharynx.

Body cavity - body cavity (haemocoel) is filled up with haemolymph.

Sensations – They have sensillae or receptor s, each of them has sensory cell, nerve fibres, a trichogen and a few hair membrane or tormogen cells. Different receptors are observed in their body. Different type of receptors are-

Gustatoreceptors – palps of maxillae and labium.

Photoreceptor - It is found in eyes.

1. Stomodaeum or fore gut – It is lined by cuticle internally consists of mouth, pharynx, crop and muscular gizzard.

2. Mesenteron or mid gut- Short tubular part lined by endoderm . At its anterior end there are eight blind glandular hepatic caeca which secrets enzyme that is required for digestion.

3. Protodaeum or hind gut- It consists of ileum, colon, rectum,anus. Malpighian tubules occur at the junction of midgut and hind gut. Internally it is lined by cuticle and the coiled secrets digestive enzymes. It is omnivorous by nature and appropriate digestive enzymes are secreted by salivary gland and hepatic caeca.

Respiratory system: It consists of a network of branched closed tubes called trachea and ten pairs of spiracles. Two spiracles are combined to form thoracic and eight spiracles combined to form abdomen. Trachea and it’s branches are supported by chitinous rings. The finer tracheoles are devoid of chitinous rings. This are partially filled with tissue fluid and help in carrying air to tissue directly. 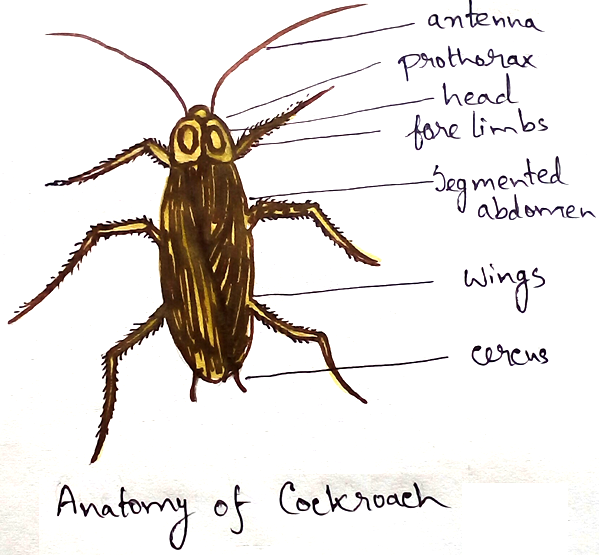 Circulatory system: Circulatory system of cockroach is open type (blood do not flow in blood vessels, it is carried in haemocoel). This haemocoel can be divided into three chambers. The three chambers are – upper pericardial sinus, middle perivsceral sinus and lower perineural sinus. This chamber is divided into two perforated dorsal and ventral diaphragms. Blood is called haemolymph. Haemolymph does not contain any pigment so, it does not take part in respiration. It conducts food, excretory materials and hormones. Heart of cockroach is elongated, tubular and pulsatile organ which is composed of narrow anterior aorta and thirteen segmentally arranged funnel shaped chambers , perforated by Ostia. Conical alary  muscles that are twelve pairs in number are attached to the dorsal diaphragm which causes straightening of the heart and causes circulation of the blood. Heart beats or pulsation are 49 per minute.

Cerebral or supra oesophageal ganglion which is known as brain . Which is formed due to union of six ganglia.

Testes – There are two pairs of testes in fourth and sixth abdominal segments. Each testes consists of 30 -40 small vesicles which form sperms. This in the most important reproductive parts of male organism. It

Ejaculatory duct- It is a muscular tube which is opened at the male genitalial pore on ninth sternum.

Phallic or Conglobate glands – Phallic duct is an accessory gland which opens, near the male genitalial pore by phallic duct.Secretion from this gland forms covering of spermatophore.

Ovaries: In the 4th and 6th abdominal segments of every female Cockroaches contain a pair of ovaries. Each ovary contains 8 ovarioles.

Oviduct – Oviduct are short tube paired that help in carrying ova from ovaries.

Vagina: both of the oviduct fuse to form vagina that opens in female genital aperture on 8th sternum.

Spermatheca – Two of this are joined basally. Only the left is developed for storing sperm.

Genital or brood pouch –It is formed by 7th sternum and has openings of colleterial glands, spermathecae and gonophore. Gonapophysis are also occurred in it.

Colleterial glands - They are branched tubular glands. Both of them open into brood pouch which produces scleroprotein for ootheca.

Copulation or fertilization or development – The sperms are transferred to spermatheca of female sixteen eggs are laid in two rows in the brood pouch. Sperms are shed over them. Fertilization occurs in brood pouch. The fertilized eggs are enclosed in purse –shaped ootheca. Nymphs emerge out of ootheca. They are alike parent except they are small and wingless. After gradual metamorphosis each gives rise to an adult cockroach.

From Cockroach to HOME PAGE