Frogs are the classes of tetra pods which are placed at the first category of vertebrates. According to some scientist it is appeared during the Carboniferous era. These are included in amphibian’s category as their one phase of life is dependent on water and the other phase is on land. The larval stage of the toad means tadpoles are dependent on water as they contain gills for the breathing and also contains tails for swimming. On the other hand when it grows up, tails are abolished and they breathe through lungs and skin due to lack of their gills.

Their body is suitable for camouflage means changes their body color with the color of environment.

Shape- its body is divided into head and trunk. Head is triangular in shape contains a conical portion called snout. It has one pair of nostrils, one pair of tympanic membrane, one pair of vocal sac. 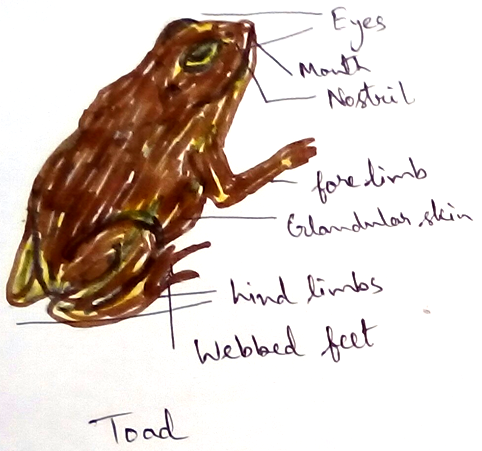 Limbs - It contains two pairs of limbs. In the front portion of the trunk contains one pairs of limb. Front limb is made up of upper arm, lower arm and menus. This portion contains three digits in each hand without thumb. Though male frog contains a special portion which is known as copulatory organ to grip the female during breeding. This portion become increase during the breeding season in male toad. Rainy season is the appropriate time for their breeding.

The hind limbs are also two in numbers. They contains three parts . Hands portion contain four digits which are also connected by thin membrane that helps in swimming. These are called webbed feet.

Skin - upper surface of the skin contains many glands which is associated with secretion. Among them there are mucous glands, parotid glands, submucous gland.

Tympanic membrane - These are present just behind the two eyes. This can feel the vibration of the sound wave. So, they are act as the auditory organs.

Nostrils - Frogs contain one pair of nostrils in front of the mouth. There are another pair of internal nostrils just above the buccopharengeal cavity.

Teeth – Teeth of frogs are premaxilary, maxillary. They are all of same kind thus and are changed in different times as the older one replaced by the new one. It is remain embedded in the jaw. Frog takes insects, crustaceans, larva etc as their food.They take the food then chew, masticated and then enter it into the oesophagus.

Eye - Eye contains three layer of membrane. Last two membranes are involved for proper​ vision from opaque to translucent. The third membrane is associated with the protection of the eyes from mud, dust, etc. This is also called nictinating membrane.

Vocal sac- It is a balloon like structure which is able to produce sound. It is bigger in case of male frog . Male frog sounds loudly to attract female frog during mating in rainy season. It Is situated just beneath the lower jaw.

Heart- Frogs have three chambered heart. So there are mixing of pure and impure blood takes place. It contains two auricles and one ventricle. 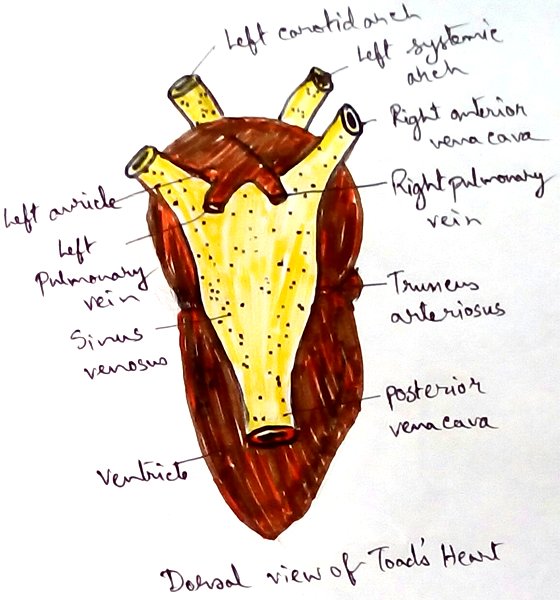 Alimentary system- this system consists of mouth, oesophagus, stomach, intestine, pancreas, liver etc. Their tongue is remain attached in the front portion and free at the back. When any organisms come in front of the frog it takes out the tongue and put it in the prey.As a result the sticky portion of the tongue stuck on it and they insert the tongue. Alimentary canal ends in the cloacal aparture.

Respiratory system - They have three types of respiration. These are –

Cutaneous respiration- Frogs skin is made up of thin layer of cells and contains large amount of blood vessels network. These networks of the skin helps in the gaseous exchange between body of frog and environment. When the frog is in water it’s body became moist and the oxygen can dissolved in the skin and enter the body. When the skin is dry mucous continuously secreted from the body and keep the body moist which help the oxygen to dissolve and enter into the body.

During​ hybernation and aestivation frogs remain inactive and respiration is occur through cutaneous​ .

Body temperature and hibernation- Frogs are belong to amphibians category as their blood is cold blooded. They donot have any mechanism to control their body temperature. So they go to hibernation during winter season. That time they remain inactive without taking food and breathing is done through skin.

They can also do aestivation during summer. Due to high temperature they are not able to cope up with the environment and under goes aestivation.

Reproduction - In frogs male and female are separated body.In case of  frogs sexual reproduction takes place.Female frog lay eggs in the water and male frog release the sperm in water.External fertilization takes place as the mating of sperm and ovum takes place outside their body in water.In this time both male and female frog placed in a specific posture to make sure that the sperm transfer takes place in proper way and it fertilized the egg. After fertilization larva is developed from the egg and give birth to the tadpoles. From tadpoles due to morphogenesis adult toad appears.

From Frogs to HOME PAGE