Gymnos = naked and sperma = seed. So, it means naked seeded plant. The term Gymnosperms was first introduced Theophrastus in 300 B.C. in his book “Enquiry into Plants” but Robert Brown in 1827 recognized the group that –female flowers of Cycads and conifers are actually naked ovule. Tallest gymnosperms and the father of the forest Sequoiadendron giganteum. Cycas and Ginkgo represent a large group of plants and possesses trait of extinct pteridosperms and other gymnosperms. So, they are called living fossil.

Characteristics of gymnosperms are follows-

• The plants are perennial that forming a dominant flora in colder areas though their number is very small, hardly 900 species. It is due to their evergreen habits.

• The foliage leaves do not have lateral veins. Instead, transfusion tissue (hydrostereom) occurs internally for lateral transport.

• Microsporophylls do not show distinction of filament and anther. Megasporophylls  are also not rolled like carpels.

• Ovules are unitegmic (apparently bitegmic in Gnetum). The integument is three layered. Ovules are attached to megasporophylls but are not covered by them. Each ovule has a mass of tissue which is called nucleus. It is equivalent to megasporangium. A megaspore mother cell develops in it.

• Endosperm is gametophyte. Endosperm tissue is formed before fertilization and therefore not equivalent to angiosperms where it is formed after fertilization. Full embryonic development may take place after shedding to the ground.

• Secondary growth is present in some gymnosperms. Vascular tissues are otherwise similar to those of pteridophytes with vessel present in Gnetales.

• Annual and herbaceous forms are absent. 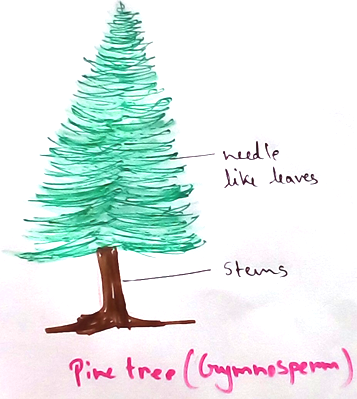 Types of gymnosperms: According to the characteristics gymnosperms can be divided into-

1. Cycads - Example of cycads is Cycas.

2. Conifers -  Example of conifers are Pinus. 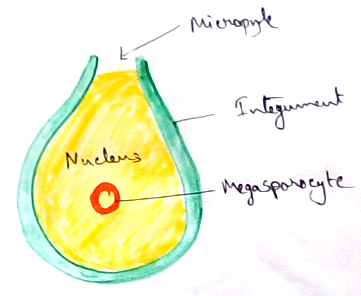 (i) Canada balsam is extracted from Abies balsamea . which is used as mounting agent for different parts of the plants.

(ii) Wood is soft and used in manufacturer of paper and timber.

(iii) Ephedrine is extracted from stem of Ephedra which is used as antiasthmatic drug.

(iv) Stem of cycas is a source of sago which is called Sago palm.

(v) Resin is present in some Pinus and some other conifers which is distilled to form rosin and turpentine.

(vi) Cedarwood oil is extracted from Juniperus virginiana. which is used in different purpose.

Questions and answers on Gymnosperms:

Gnetum trinerve is a parasite in Cinchona forests of Chimborazo.

Zamia pseudoparasitica is the only gymnosperms that grows as an epiphyte.

From Gymnosperms to HOME PAGE