Alexopoulos in 1952 defined Fungi as -“nucleated, achlorophyllous organisms, which typically reproduce asexually and sexually and whose usually filamentous, branched somatic structures are surrounded by the walls containing cellulose or chitin or both”. 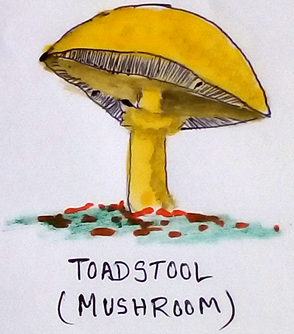 Mode of Nutrition in Fungi:

Fungi do not contain any chlorophyll, so they cannot make their own food. For nutrition they are saprophytic in nature. They have some species types of enzymes in their body. They grow on dead plants and animals and collect their food by making lyses of the dead tissues.

In Fungi three types of reproduction can be seen. 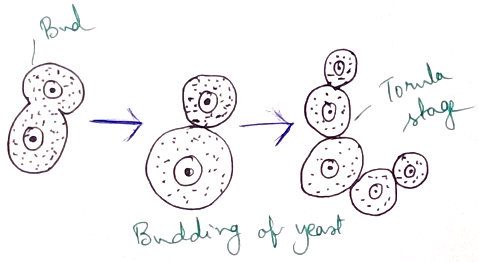 Sexual reproduction- It occurs by fusion of egg and motile male gamete. It is of 3 type- isogamy, anisogamy, oogamy.

Useful Role of Fungi are Follows:

1. In industry mushrooms are cultivated as their nutritional value is very high. Mushrooms are rich in vitamin and minerals (especially vitamin B). It is also rich in protein and uses by the people those who are no vegetarian for their protein supplement.

2. Yeasts are used in bread making industry because they give out carbon dioxide and made the item spongy.

3. Yeast is also used in fermentation industry for making wine as it turns glucose into ethyl alcohol.

4. Penicillium is enriched in high quality of protein, fat, minerals (calcium, phosphorus), vitamin A, vitamin B which adds flavour to the cheese.

6. Penicillin was the first antibiotic that discovered from Penicillium notatum.

7. Beside these fungi are also used for synthesis of different vitamin, protein, fats, and enzymes.

Questions and Answers on Kingdom Fungi:

1. What is the black powder we see on stale bread?

The black powder is the spores of moulds, (like Rhizopus), that fall on it and germinate to form mycelium, when a piece of bread is kept in a warm place. 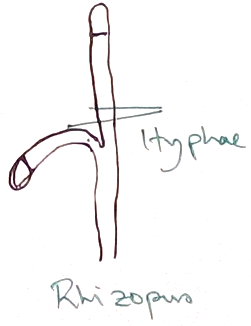 3. What do you mean by fermentation?

It is a type of anaerobic respiration done by yeast and other microorganisms where glucose is converted into ethyl alcohol and carbon dioxide.

From Kingdom Fungi to HOME PAGE