The plants of the liliaceae family have 250 genera and 4000 species. While in India the number is 169 species. They are considering as typical monocot family and represent the basic monocot stock from which the other monocot family have been arrises. It shows some similarities with some families, As it shows affinity for Amarydilaceae, Jucaceae. But due to presence of superior ovary and axil placentation it differs from other. Plants of this family are known as lily family. Examples of plants are –Aloe, Lilium, Tulip etc.

Characteristics features of liliaceae are following:

1. Herbaceous plants (rarely are shrubs) having bulbs and the roots are contractile by nature.

2. Leaves are alternate or whorled along stem or in a basal resetter.

4. Inflorescence are usually determinate in nature.

7. This type of plants contains six stamens and pollen grains are monosulcate.

8. It contains six carpels which is connected with superior ovary and axil type of  placentation is observed.

9. Fruits are having loculicidal capsule with usually flat and disk shaped seeds.

10. Endosperms are oily by nature.

11. Nectars are produced at the base of petals. 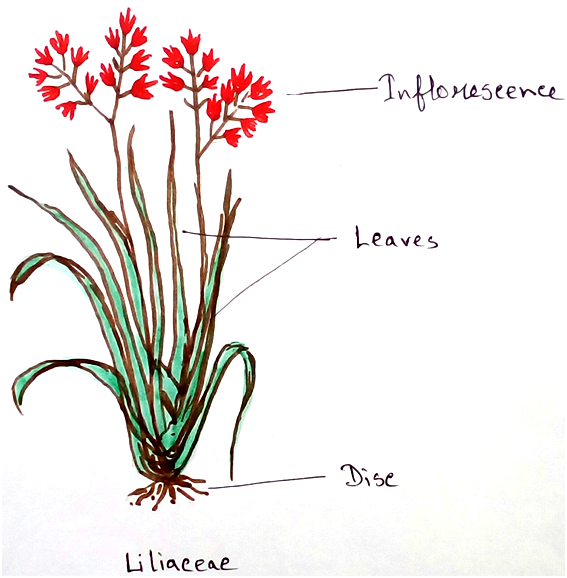 The family liliaceae can be subdivided into twelve divisions. They are-

Aletrioideae – Short rhizome with having arrow or lanceolate radical leaves.

Luzuriagoideae – Shrubs or under shrubs with climbing twigs.

VI. Resin can be extracted from some type of plants.

1. Name a plant of liliaceae which show reticulate venation.