Protozoa can be divided into different phylum. They are following-

I. Zooflagellata: it includes the protozoans which have flagella for locomotion. The cell is covered by periplast. Holistic or absorptive nutritions are observed. 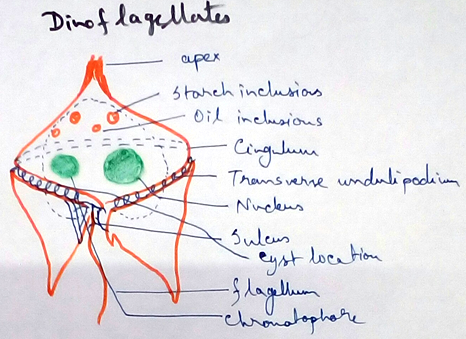 According to number of flagella zooflagellates can be divided into-

II. Sarcodina: Here locomotory organs are pseudopodia. According to shape of pseudopodia, it can be divided into-

III. Cilliata: The protists have numerous cilia, a pellicle, regions of ingestion and version and nuclear dimorphism (reproductive micronucleus and vegetative macronucleus). A few forms are sedentary or colonial. Ciliates are fastest protists with a maximum speed of 2mm/sec. It is 1mm/sec in paramecium.It contains trichocyst and cillia. Vorticella is stalked ciliates found attached to various objects inside fresh water ponds. Stalk is contractile. The body is like an inverted bell thickened on the rim to form collar or lip. 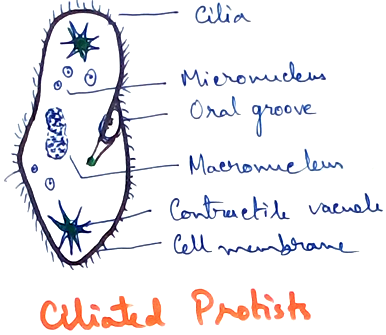 V. Parasitic protozoans: they are also called sporozoans. They are spore forming protozoans. It lacks locomotory structures and contractile vacuoles. The body is covered by pellicle or cuticles.Plasmodium vivaxis malarial parasite spread by female anopheles mosquito. Life cycle of Plasmodium is cinematic and triphasic (schizogony, gamogony and sporogony). 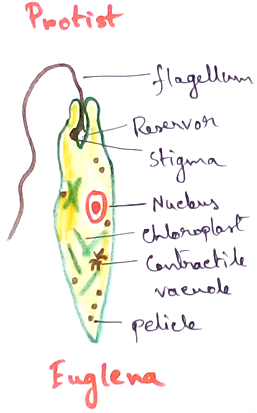 Short Questions and answers on Major Groups of Protozoa:

1. Who is the biological primary host of Plasmodium?

3. What is responsible for producing Chagas' fever in children?

4. What is the cause for development of amoebic dysentery?

5. What was the first drug used for malarial treatment and what was origin?

Quinine was the first drug used for treatment of malaria and it is collected from the bark of Cinchona.

From Major Groups of Protozoa to HOME PAGE