Characteristics features of mosses are:

1. These types of Bryophyte are foliose with radial symmetry.

3. Contains protonema stage (the precursor of the leafy gametophores of certain mosses and liverworts developed as a product of spore germination in a form of a filamentous or thalloid mass) in life cycle.

4. Sex organs generally occur in cluster at the tip of stem branches.

5. Sporophyte or sporangium has assimilatory tissue, a central columella and peristome (in most mosses a ring of tooth like cellular or acellular structure is developed at the mouth of capsule).

6. Leaves and stems of mosses are not homologous to those of vascular plants because of being gametophyte.

7. Most of the mosses have upright stems with conducting tissue hadromes and leptom both in gametophytes and sporophytes.

8. Stomata present on the epidermis of sporophyte but with single doughnut shaped guard cell.

9. Most of them contain operculum and annulus.

10. Sporophyte in most emerging early from calyptras, maturing after its rupture. 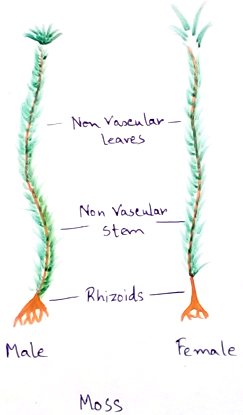 Some of the mosses are as follows:

Funaria/Moss – male and female sex organs are born on different branches of the same plant, this condition is known as autoicous condition.

Polytrichum - it is also called hair cap moss. It shows distinct vascular system for carrying water whereas other moss they are lack of this system.

Sphagnum - the whole sporophyte is raised by an elongated gametophytic stalk called pseudopodium. A pressure of about 3 atm is generated in the lower half of the capsule as it dries. The pressure dislodges the lid or operculum with an explosive force and spores are effectively dispersed.

Questions and answers on Mosses:

1. Which Moss is called granite moss?

Some species of Andreae are known as granite mosses. The plants are known to occur in cold mountainous regions of Arctic, often on granite rocks.

Grimmia longirostrisa moss of Andean Paramo which grows on thin soil of rocks, become disrupted by frost. These disrupted soils chunks with the moss results in spheroid mass of soil and are called moss balls.These moss balls are freely distributed by wind. And since the moss has the unique capacity of regeneration from any part of the body,promptly in develop into new plant in suitable environment.

3. Which moss is called bogmoss and why?

Sphagnum is called bogmoss. Phenolic substances present in the dead cells extract metallic cations from in flowering waters and release hydrogen ions. This makes the acidity values around pH 4.0 or even less. The lack of oxygen in the lower levels of the bog hinders the oxidation of dead organic matter, leading to accumulation of peat.

From Mosses to HOME PAGE