Characteristics of phaeophyceae are following

(i) Mostly marine, only a few are fresh water.

(ii) All species are multicellular; the plants may exhibit complex morphology with highly differentiated tissue.

(iv) Flagellate cells have typical heterokont photoreceptors at the base of smooth flagellum and have adjoining eyespot inside the cells within the chloroplasts.

(v) Transition region of flagellum is lack of transition helix.

(vi) Chloroplasts are may be discoid.

(x) Mitosis are of semi closed.

(xiv)Meiospores are produced in until ocular sporangia.

(xvi) In case of later meiosis is gametic. 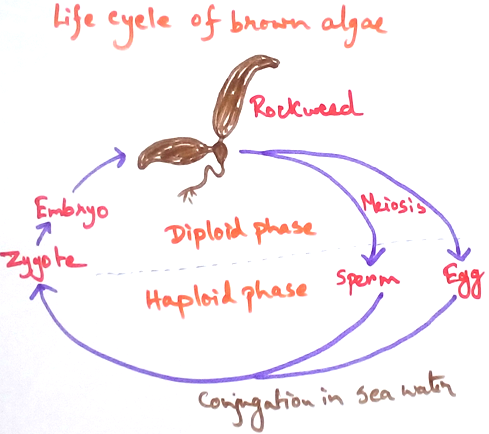 Phaeophyceae can be divided into different order. They are following-

Questions and answers on Phaeophyceae:

1. What is photosynthetic reserve in phaeophyceae?

2. How are brown algae related to ozone hole?

Like man made halogenated compounds, CFC (chlorophyll fluro carbon), brown algae are known to release large quantities of volatile brominated methanes into the environment. It is suspected to be responsible for ozone destruction in the atmosphere above the Arctic as the annual global input of the algal organobromides has been estimated at ca 10000 tonnes per year. Arctic is dominated by gigantic seaweed.

3. What do you mean by sirenine?

4. Name a member of phaeophyceae where encrustation of calcium carbonate is observed.

5. What do you know about kelps?

Members of Laminariales are called kelps. The term is also applied to burn ash of Laminariales. Kelps are characterised by large sporophytic thallus differentiated into holdfasts, stipe, blade regions with an intercalary meristem located at the junction of the stipe and blade.

6. Where do you find phase change in Phaeophyceae?

From Phaeophyceae to HOME PAGE