Life cycle of plants: It is recurring morphological cytological phases in an organism that occur in each individual organisms from it’s birth to death.

According to it can be divided into three –

I. Haplobiontic - In this cases there is single somatic phase is present. Again it can be divided into two-

1. Haplontic -  It has single somatic phase which is haploid. Diploid condition is present only in zygote or zygospore wherein meiosis occurs to produce haploid condition again. Example of haplontic is mainly algae (Spirogyra, Chlamydomonus, Ulothrix and Chara. Here alteration of generation is absent.

2. Diplontic –In this case single diploid somatic phase is observed. Haploid conditions occurs in gametes which is formed through meiosis and it is fused to restore diploid state. Here alteration of generation is absent. Examples of diplontic are – Cladophora, Bryopsis, Fucus, Sargassum etc.

1. Diplohaplontic: Both haploid gametophyte and diploid sporophytic somatic phases occur in the life history. It has two subtypes. They are-

2. Haplohaplontic – Only haploid cytological stage is observed which contain two somatic phases. They are dimorphic haplobiontic or diphasic haplohaplontic. Example of this is Porphyra. 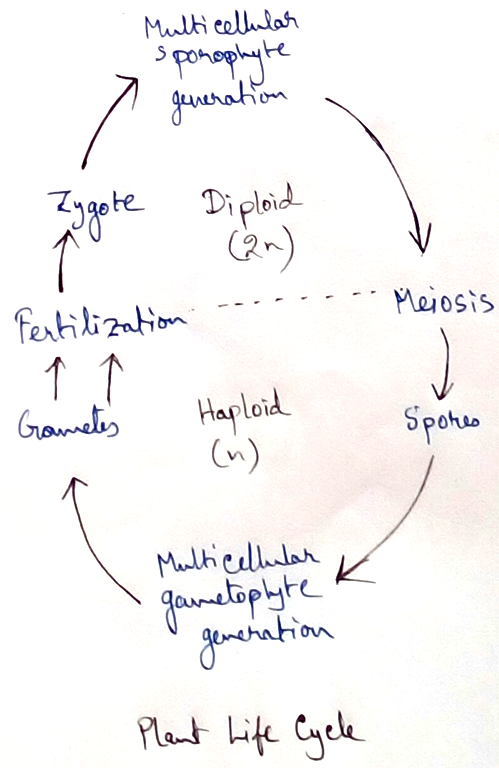 III. Triplonbiontic – Two types of  somatic phases areoccurred. They are-

2. Diplodiplohaplontic – Triphasic or trimorphic life history with two diploid and one haploid stages. Example is Polysiphonia.

Bryophyte: Bryophyte has haploid gametophyte dominant body. It produced eggs (n) in the archegonium and sperm (n) in antheridium. Sperms need water to swim towards the eggs for fertilization and zygote is produced (2n) which give rise to the sporophytic body (2n). Parasitic sporophyte (depending on female gametophyte) undergoes meiosis division to give rise gametophytes.

Other plants have diploid dominant body and haploid gametes give birth to the diploid new plant.

Question and answer on Plant Life Cycles and Alternation of Generations: