The cryptogams were given to all nonflowering plants by Linnaeus in which sexual reproduction was unknown at one time. Cryptogams characters associated with the presence of vascular tissues lead to introduce the term. Pteridophytes are also called botanical snake.

Characteristics of pteridophyta are:

(i) They are seedless vascular plants, primitive tracheophytes or vascular cryptograms which originated in Ordovician – Silurian periods.

(ii) Plant body is sporophyte which is differentiated into true stem, leaves and root.

(vi) Gametophyte a free living generation, but very reduced, called a pro thallus and bears antheridium and archegonia on same or different prothali.

(vii) Female sex organ archegoniu , ovum remains in archegonium and spermatozoa swim to it by chemotaxis to effect fertilization.

(viii) Plants exhibit true alteration of generations. Saprophytic dominant and conspicuous, but they dependent on gametophyte generation early in life.

(ix) An embryo stage is present. Embryo may be endoscopic or exoscopic .

(x) Rhizoid can also occur in

They are of three types –

1. Lycopods: This contain the most primitive stele which consists of a solid core of xylem surrounded by phloem and pericycle. Pith is absent. Hapno stele, actino stele, plecto stele, mixed protostele, protostele with mixed pith is present.

2. Horse tails: Equisetum included in this category. It is called living fossil as it is the only member of the species that remain alive.

3. Ferns: Ferns live in moist cool and shady places. They are perennial and evergreen with and underground rhizomatous stem, large aerial leaves or fonds and adventitious roots. Young leaves show circinateptyxis or vernation (coiled like a mechanical watch spring with apex in the center). Younger parts of the leaves and rhizome are surrounded by scales or ramenta. Sclerenchymatoushypodermis broken in the region of leaf bases and a ground tissue having leaf traces in outer part followed by vascular strand which is solenostele (Marsilea, Adiantum)or dictyostele (Dryopteris, Pteris). 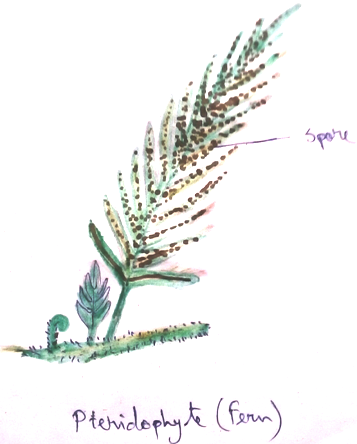 Some pteridophytes like Selaginella also show tendencies towards seed habit. The important requirements of seed habit are development ofheterospory, functioning of only one megaspore mother cell, degeneration of three megaspores and formation of female gametophyte inside the megasporangium. The latter is also covered by an integument like covering. The microspore or pollen grains are brought near the megasporangium by pollination. The microspore also develops a pollen tube for carrying the male gametes. The embryo develops for some time inside the integumented megasporangium or ovule and maturation of the latter into a seed.

Question and answer on Pteridophytes:

What are tree fern?

Members of Cyatheaceae are known as tree ferns because of trunks. E.g. Cyathea, Alsophila.

From Pteridophytes to HOME PAGE