Secondary phloem do not persist as a result when it is become operational the previous phloem get crushed before it becomes operational. Secondary xylem and on the other hand primary xylem both are persist. 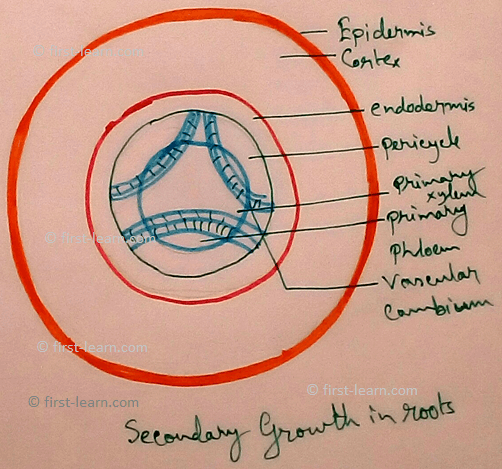 Cork cambium or phellogen are formed from pericycle which produces phellem or cork on the outside and on the other hand secondary cortex or phelloderm on the inner side. These three are together called periderm. In this case cortex and epiblema peel off, cork or phellem is made of dead cells. Lenticular are observed in different places.

In some plants storage roots are observed where accessory cambial rings are formed which cut out less or little secondary xylem and more storage parenchyma in secondary phloem. Example- Beet, sweet potato.

1. What do you mean by primary xylem and secondary xylem?

Primary xylem is derived from procambium during primary growth and is consists of protoxylem and metaxylem.

Secondary xylem is formed from vascular cambium during secondary growth.

2. What do you mean by primary phloem and secondary phloem?

Primary phloem is formed from procambium during primary growth. It may or may be not show differentiation into protophloem and metaphloem.

Secondary phloem is produced during the secondary growth of vascular cambium.

From Secondary Growth of Roots to HOME PAGE