They Never Fail who Die for a Great Cause

History is a lesson. It is interesting, illuminating and offers such rare insight for the ones who are willing to learn and be inspired that there is no dearth of gems hidden in its pages.

Back in India, we have listened to the tales of Mahabharata and much as we laud the ultimate victory of the Pandavas over the Kauravas, we cannot help admire the courage of people like Abhimanyu, Ghatotokach, Karn and scores of other unsung people who gave their life for a cause which was noble and truly close to their heart without having lived to reap the rewards of their struggle.

Stories of Porus Vs Alexander are as much a part of our folk lore as any other. Porus is revered and respected even though he lost to a more formidable opponent for the cause of his fight and the manner in which he fought it.

From the land of chivalry and sacrifice, comes the tales of brave Padmini who performed the Jauhar to save her honour and that of hundreds of other women from the fierce Khilji Empire. 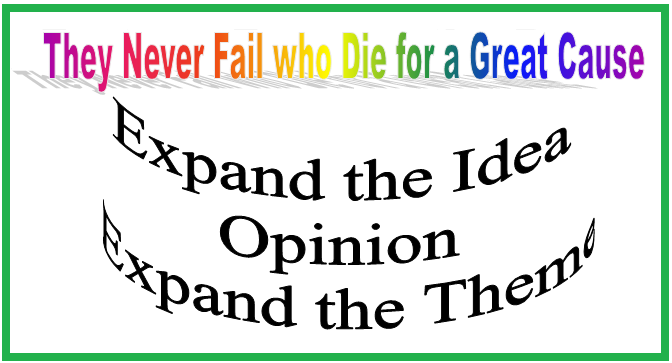 Cut to 1857 and the first War of Indian Independence. Talesof bravery and courage of people like Mangal Pandey, Begum Hazrat Mahal of Lucknow, RaniLakshmibai of Jhansi, Kunwar Singh of Bihar, Tantya Tope, Nana Sahebof Kanpur and Bahadur Shah Zaffar of Delhi are known to have inspired generations for their determination and courage to fight under such extremity.

In the first half of the 20th century, with the nation severely reeling under the tyranny of the British rule, the pages of Indian history are filled with people who courage which leaves one dumbfounded. People like Subhash Chandra Bose, Chandra Sekhar Azad, Bhagat Singh, Khudi Ram Bose, Ram Prasad Bismil, Ashfaqullahand Master Surya Sen are iconic figures who continue to inspire millennials with their thought provoking philosophy and their ultimate martyrdom.

Their death proved to be a clarion call for the youth of the Nation who got committed to apply themselves for the freedom of their motherland. The unforgettable contributions of these young men motivated several crore Indian population to take up intense and serious actions towards freeing their Motherland from the clutches of foreign regime.

One of the most iconic man who inspired not only Indians but world leaders like Martin Luther King, Nelson Mandela and others through his philosophy,words and action was Mohandas KaramchandGandhi. He applied himself wholeheartedly for the cause of the Indian Independence, yet did not live to breathe in the free air for very long. Brutally enough, he was assassinated by his own fellow country man, Nathuram Godse on 30th January,1948. He continues to survive in the lessons of passive-resistance and non-violence that he selflessly gave to the world and made it a much more stable place to live in.

Every day since then, there are hundreds of people laying their lives at the borders of our Nation for the safety and security of their fellow- men and it is a dishonour to them to consider their deaths inconsequential. They are martyrs who give up their lives for cause of the greater good and as such inspire, ignite and sow the seeds of sacrifice and valour in the hearts of million others.