Where do Animals Live?

Where do animals live?

Animals are found in every part of the world. Some live in forests. Others live in hot, sandy deserts. Some live in lakes, rivers and the sea. They are even found in very cold areas like the Arctic, where the ice never melts!

Humans live in many different parts of the world. They eat many kinds of food. They wear different clothes to suit the weather whether it is heat or cold.

﻿Some wild animals, like elephants, live in groups or herds. They look for food together. They warn each other of danger. Their habitat is usually a forest with lots of trees and tall grass.

Deer also live in a herd. They need a habitat with lots of tall grass. They can hide in this grass and can also find enough food.

Animals like the tiger, the lion and the hyena hunt other animals like deer. They live in places where their food is easily available.

A tree is a habitat for many animals. Some of them eat fruits and tender leaves. Others pick at insects on the trunk. 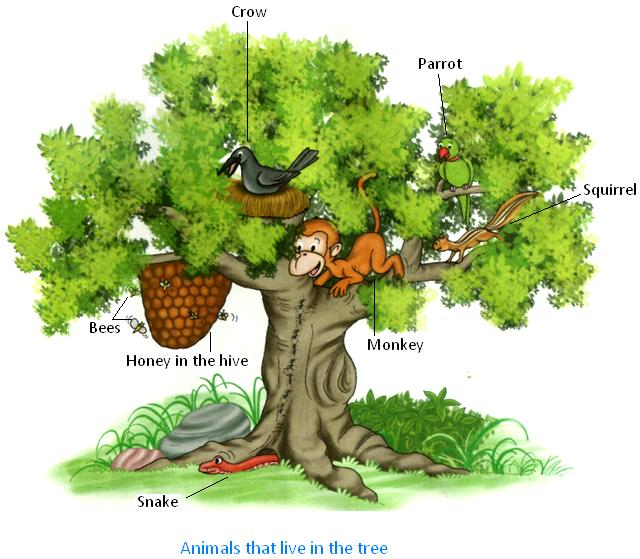 The animals like monkey and birds live in the tree.

Ants live underground in large groups called colonies. They make long tunnels under the earth. They live in these tunnels and store food there.

Some animals carry their homes with them. These homes are called shells. The animals can pull themselves into the shells. The shells are hard and keep the animal safe.

Shells like these can be found on a beach near the sea. They are the homes of sea animals. When the animals die, the shells become empty.

Some animals like fishes, whale live in water﻿. Fish of many kinds live in salty sea water. Some live in rivers, lakes and ponds. Some other water animals are the octopus, the shark, the seahorse and the jellyfish.

Insects are small animals with six legs. Many of them have wings too.

Some animals like centipede live in damp, dark places. They can often be found under stones and leaves in a garden. Do not try to touch them. Some of them may give you a nasty bite. Some are poisonous.

From Where do Animals Live to HOME PAGE