Animals that give Birth to Babies

Humans, lions, tigers, cows or bears are the animals give birth to babies. The babies are formed inside the body of the mother. They stay inside for several weeks and are then born. When the babies are born they are weak and helpless. Their mothers care for them and protect them till they learn to look after themselves. They feed their babies with their own milk. These animals are known as mammals. 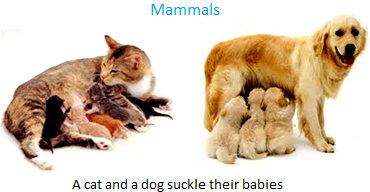 Accordingly, we know the female mammals give birth to their young ones. A young one takes shape inside the womb of its mother who finally gives birth to a developed baby. She also suckles her baby through its infant stage.

What are the common features of the mammals?

The common features of the mammals are as follows:


(i) Female mammals conceive to give birth.


(ii) They give birth to young ones of their own kind.


(iii) The female mammals have breasts on their bodies. They feed their young ones with their own milk through the breasts.

(iv) They have hair on their bodies.


(v) The temperature of the body of a mammal remains nearly constant. They have warm blood.

From Animals that give Birth to Babies to HOME PAGE