Plastids are semi-autonomous cell organelles which are surrounded by double membrane envelope, take part in storage and synthesis of organic compounds which occurred in some plant and protistans.Plastidome consists of  all the whole plastids complex of cell. Plastids are developed from colourless precursor of proplastids. It can be divided into three types- leucoplast, chromoplasts and chloroplast. Chromoplasts can be developed from proplastids, leucoplast and chloroplast. Plastids- are first discovered by Haeckel in 1866.

Plastids are the only cell organelles that present in the plant cells.

Structure of Plastids - Each chloroplast is surrounded by a double membrane envelope within the envelope matrix or stroma and thylakoids or photosynthetic lamellae is observed.Matrix contains crystallo- colloidal complex having 2 to 6 copies of circular or rarely linear chloroplast DNA (ctDNA), 70S ribosome, plastoglobuli, starch grains, granules of phycoferritin, enzymes of Calvin cycle etc.All plastids possesses naked DNA. Rubisco (ribulose bis phosphate carboxylase, RuBP or RuDP) is the most abundant enzymes of the biological world. Thylakoids are flattened sac like structure where the membrane are flattened sac like structure. At different places that are formed grana.Chloroplasts are having 40 to 60 grana with each of the granum having 10 to 100 thylakoids . Thus there is differentiation of granal and stromal thylakoids. Space present in a granal thylakoids is called loculus and that of stromal thylakoids is termed as fret channel.This contains the mobile parts of the electron transport chain embedded in a semifluid complex. Photosynthetic pigments formed two complexes called PS1 and PS 2. Photosystem 1 is present on stroma thylakoids and unapressed parts of granal thylakoids (photocentre is P700.). Photosystem 2 occurs in apressrd thylakoids part of grana(trap centre is P 680). Granada are not present in algae and bundle sheath of chloroplast of C4 plants.

Leucoplast - This plastids are colour less plastids of various shapes that generally occurs in non green plant cells near the nucleus. Leucoplast get specialised into –

Amyloplast - It causes storage of starch. 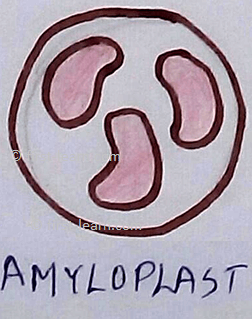 Aleuroplasts - It causes storage of proteins.

Elaioplasts - It is associated with storage of fats. 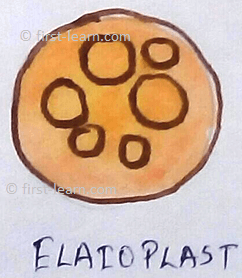 Chromoplasts - This type of plastids - are other than green colour which take part in the attractionsfor animals to flowers and fruits for performing pollination and fruit dispersal. Changing of fruit colour from green to yellow during ripening is the conversion of chloroplast to chromoplasts.

Chloroplast - This type of plastids- are green in colour which take part in photosynthesis and temporary or permanent storage of food. 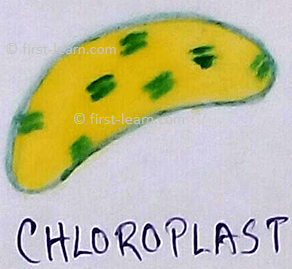 In green algae chloroplast are observed of different shapes and sizes but for higher plants it is of disc shaped with diameter of 2to 4 micrometres in thickness. Chlorophyll a,b etc.

Functions of plastids are following-

1. Chloroplastids are associated with photosynthesis of plants.

2. Green algae contains a special structure within their chloroplast for storage offood in the form of starch. This is called pyrenoid.

3. Different colour full plastids are there that attracts bees, butterfly,insects and help in pollination of plants. As a result flowers are converted into fruits .

From Define the Plastids to HOME PAGE