Parts of a Flower

The flower is the modified shoot for reproduction.

The stalk of flower is called pedicel.

The expanded tip of the pedicel from where the floral parts arise is called thalamus.

A typical flower consists of different parts. They are

Calyx: It is the first whorl containing sepals. Sepals may be united (gamosepalous) or free (polysepalous). Sepals protect the inner part of the flower in the budding stage. Coloured sepals are called petaloid sepals. In some plants additional whorl of sepal is found below the calyx  called epicalyx.

Corolla: It is made up of petals . When petals are united they are form gamopetalous and when they are free they produce polypetalous. Petals are the most attractive part of flower which attract insects. Insects come for collecting nector and by the fault they help in pollination. As a result fertilization takes place and flower is converted into fruit. If there is a structure where sepal and petals cannot be distinguished separately are called perianth.

Androecium: collective parts of the male reproduction is called androecium. It is made up of stamens. Stamen is made up of a filament,anther and connective. Anther contains pollen sacs which further contain pollen grains.

According to position of  ovary in the flower,it can be divided into different types. They are –

B. Perigynous - The thalamus formed a cup-shaped structure around the ovary. Ovary is half inferior. Example- rose. 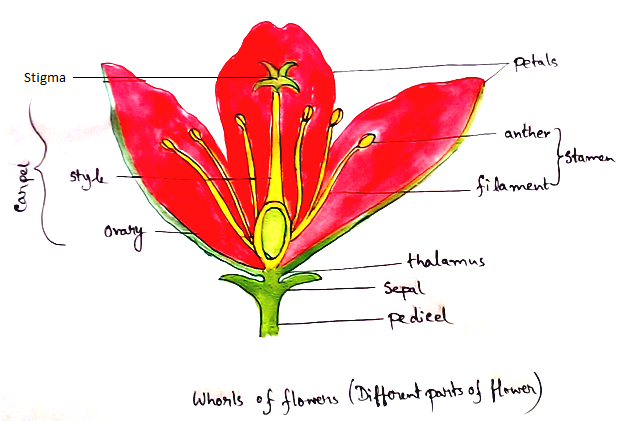 According to presence of whorl s flowers can be divided into different types:

Bisexual flower: A flower which contains both androecium and gynoecium is called bisexual flower. Example- mango.

Monoecious: A plant which has both staminate and pistillate flowers borne on the same plant. Example- corn.

Question and answer on Parts of a Flower:

Arrangement of ovules and placenta within an ovary is called placentation.

From Parts of a Flower to HOME PAGE