Division of a Decimal by a Whole Number

Steps of division of a decimal by a whole number:

Step II: Then on reaching the tenths place that is the first place in the fractional part of the whole number place the decimal point

There is another trick in division of a decimal is that then the digits in the dividend is no more but the division is not complete then we need to add zeros at each step till the division is complete.

Here are few examples to illustrated division of decimal by a whole number: 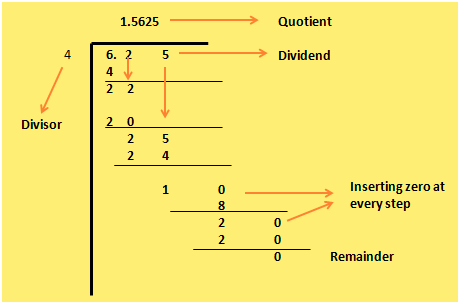 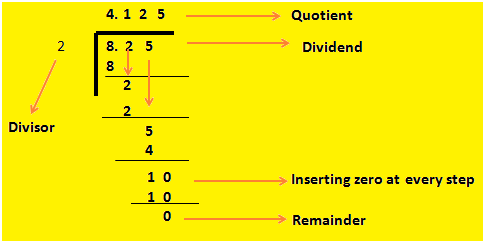 Here 29.10 is divided by 6 ignoring the decimal point. Then in the quotient the decimal is placed after dividing 29 by 4 that is after the first digit. On dividing 29.10 by 6 there is no remainder hence we need not put any extra zero at any step to complete the division. 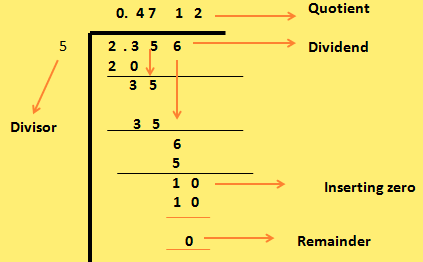 Here 2 cannot be dividend by 5 as 2 is less than 5 hence we need to consider 23. As 2 cannot be divided by 5 hence we need to put 0 in the quotient and then place the decimal point and continue the division. At the last step we would get a remainder 1 and in decimal division we know we cannot leave remainder hence a zero is placed with 1 to make it 10. Then 5 multiplied by 2 is zero.