Definition of interphase- Interphase is a stage between two mitotic cycles in an eukaryotic cell, during which various physical and chemical changes for the preparation of cell division takes place.

Interphase of cell division is the longest period of cell division and is called inter-mitotic phase. The chromosomes appear as long and thin forms diffused chromatin net. It is not properly visible due to highly hydrated conditions.

Subdivisions of Interphase - In 1953 Howard and Pele divided interphase into 3 subtypes.

1. Post mitotic Gap phase - It is also called G1 phase. This phase occupies 30- 50% of the cell cycle .As it is the early stage of interphase and is called first growth phase. This phases are followed by –

* In this phase RNA and various regulatory proteins are synthesized.

* Enzymes those are required for DNA synthesis like DNA polymerase are synthesized.

* Tubule is accumulated which causes elongation of the nucleus. 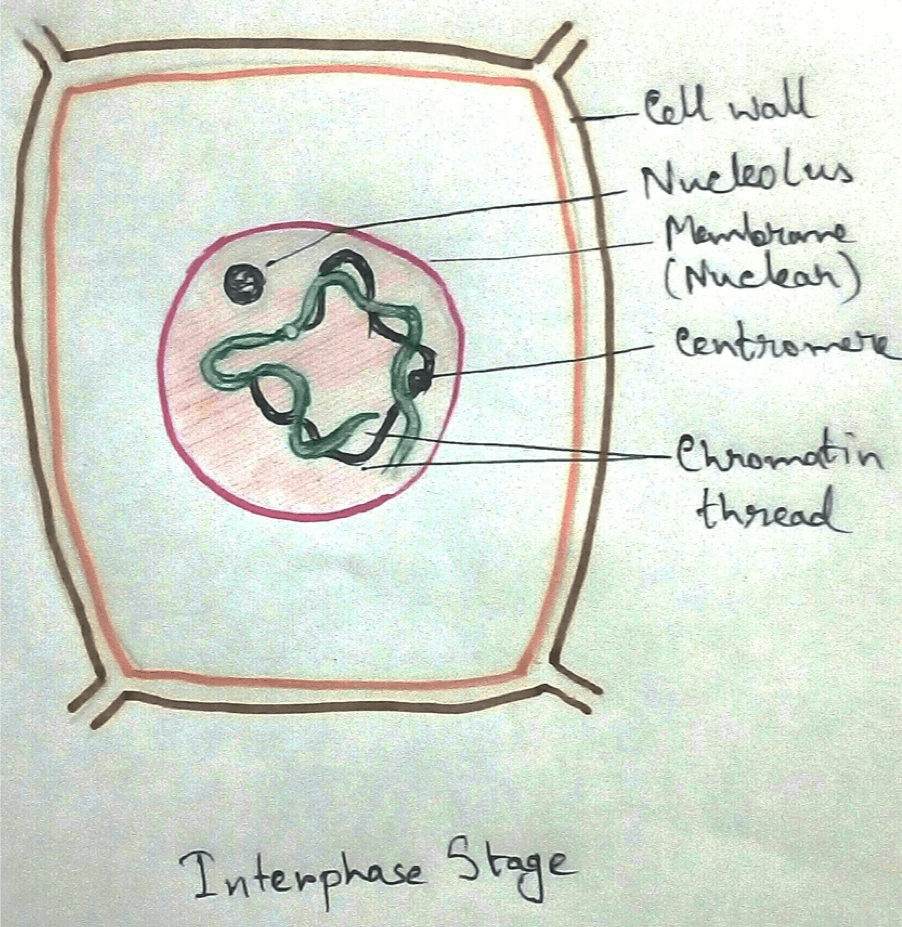 2. Synthetic phase (S-Phase) - It occupies 35 to 45% of the cell cycle. It is called the mid interphase stage in which all the major metabolic activities of dividing cell takes place.

The characteristics of stages are-

* DNA is synthesized in this phase.

* Volume of the nucleus becomes double when DNA is replicated.

* Single chromatid of the chromosome gets duplicated to form two identical chromatids.

3. Pre-mitotic gap phase (G2 phase) - It constitutes 10 to 20% of cell cycle and also referred to as the second growth phase and actually is the gap between S phase and prophase .

Special characteristics of the interphase-

* Synthesis of specific RNA and protein.

Major Characteristics of the Interphase

The major characteristics of interphase are:

1. The replication of chromatids and DNA .As a result the single chromatid (monad) becomes double (dyad).

3. Nucleolus enlarges due to accumulation of RNA and ribosomal protein in this stage.

5. In general, the cells are increase in size due to accumulation of cytoplasm.

6. In case of animal cell , a new centrosome formed from the existing one with pair of centrioles which placed at right angles to each other. Means there are two pairs of centrioles in the cell.

7. In interphase the thin and elongated chromatin threads of the chromatin network appear diffused and less divisible due to highly hydrated conditions.

8. The net membrane biosynthesis increases and it remains stored at the cell surface in the form of blebs which help the cell to divide on animal cells.

Questions and Answers on Interphase:

In terminally differentiated somatic cells like neurone and muscle cells which cannot be divided. This arrested phase of G1 is known as G0 phase.

2. When is interphase observed?

The period of interval which is observed between the two cell divisions is called interphase.

From Explain about Interphase to HOME PAGE