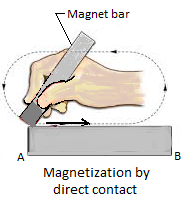 Take an ordinary bar (AB) made of iron magnetic substance).

Place it on a table and hold it firmly with left hand. Now take a strong magnet bar. Hold it with right hand in a fixed inclined position. Bring one pole of the bar magnet in contact with end A of the iron bar as shown in the figure. Now rub it down to end B of the bar along the surface. Repeat the process several times. After a few minutes the iron bar will turn into a magnet bar.

The method of removing of the magnetic properties of a magnet is known as demagnetization. It can be done by the following methods:

1. Hitting a magnet heavily by hammer.

2. Heating a magnet at high temperature.

3. Placing two magnets with same poles facing each other.

The following uses of magnet are:

(i) Magnet is used to prepare mariner’s compass.

(ii) Electric bell and air pumps used in aquarium, are prepared with electromagnet.

(iii) Magnet is the main component of all types of speakers, telephone receivers, head phones etc.

(iv) Magnet is used to fix the door of a refrigerator.

(vi) Specially designed electromagnets are used to remove iron fillings from the eyes.