How many times we have come across this proverb in our daily life and how many times we have been inspired to use it ourselves? Human brain is the most evolved, advanced and developed brain in all species. It is this fully functional brain, working overtime that has allowed man to make successive leaps across different ages and time periods and established his supremacy on this planet in unimaginable ways.

Though the exact origin of the proverb is not known, the earliest reference of this can be found in the works of the Greek philosopher Plato. The proverb in its modern form appeared in the world of Richard Franck in the year 1658.

All the major discoveries and inventions made by the human beings are rooted in their being necessitated at some point of time. Man’s urgency and the desire to make the earth a better, more comfortable and habitable place to love in is the driving force behind most of the discoveries and inventions, made till date. Man is an extremely resourceful creature. When pushed against the wall, his mind shall come up with the most innovative breakthroughs to break open the glass ceiling and venture into new terrains. 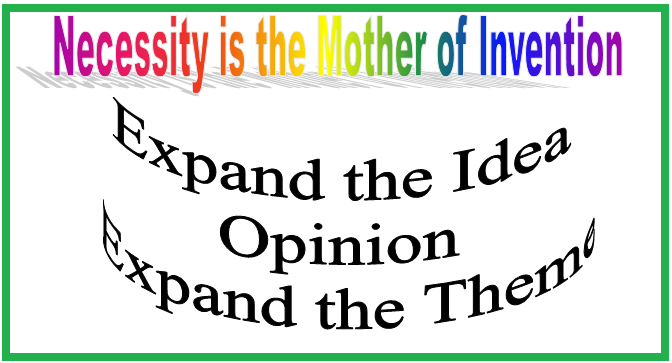 From the very first discovery of relevance, that is of fire to the TESLA automated cars being now experimented on roads man has come along way. From the earliest stage, man when he first appeared on planet Earth felt the need for food, shelter and tools to protect him from the wild animals and fend food for himself. One by one he made it possible to acquire term. Once those essential necessities were in place, the quest for anew ingredient to make life more seamless and harmonious lead to the discovery on the next new thing. The series continue d and is still in process. It is this endless and ceaseless endeavour that makes the human race better itself with every passing day and makes him the most formidable species inhabiting the earth.

When light was needed, Edison invented bulbs in 1879, similarly in case of transport systems, television, radio, telephone, radio, mobile, internet, computer all this and much more were discovered to answer the pressing needs felt by human beings at some juncture.

In the world of medical science too, medical science has made advances by leaps and bounds in response to the needs of times. Vaccinations, antibiotics, surgical operations, C.T Scan, X-ray procedures and so much more have not helped to cure critical diseases but also save people’s life in various cases.

It is critical to pinpoint at this juncture that not all inventions are beneficial for mankind or the planet. The inventions of modern weapons of warfare capable of mass destruction is detrimental to the health of the planet Earth. One needs to take a step back, review and analyse what the next invention and its consequence to the world shall be, in the larger context. Necessity for one individual or one State or One Nation must not be the cause of bane for the rest of mankind.

From Necessity is the Mother of Invention to HOME PAGE