Revolving Motion of the Earth 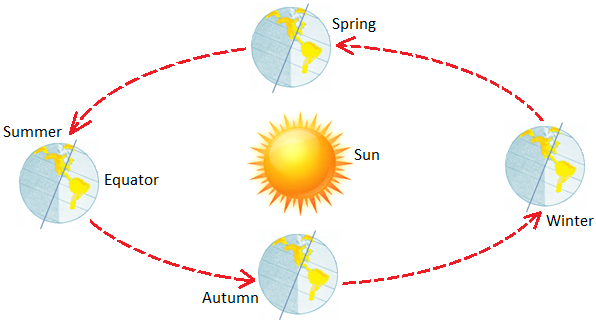 The Earth Revolving around the Sun

Nearness to the sun causes summer season in that hemisphere. When the sun is away from the hemisphere, there is winter.

Finally through the earth’s continuous movement, the earth goes to summer season when the northern hemisphere was near and the southern hemisphere away from the sun. The earth thus completes its one revolution.

During one complete revolution, the earth undergoes numerous changes in the seasons. In northern hemisphere the seasons are known as summer, autumn, winter and spring. In between the summer and autumn there are heavy rains in the northern region of the earth so, they are known as monsoon or rainy season. In summer season the days are longer than the days in winter. The change of seasons and duration of day and night depends upon distance of the sun from the earth. Thus, the sun is the main reason of changes in the seasons.

From Revolving Motion of the Earth to HOME PAGE