Stem and its Modifications

Stem: Stem is the ascending part of the plant axis which develop from the plumule, grows by means of terminal bud and shows differentiation of nodes and internodes. It bears leaves, flowers, fruits and seeds along with buds. Leaf bearing part of the stem is called shoot. Stem branches are exogenous in origin (from surface meristem in the cortex). It is positively phototropic, negatively geotrophic and hydrotrophic.

Stem Branching – Unbranched stems are called caudex or columnar. Caudex with hollow internode or jointed stem is called culm. It is of two types –

Lateral branching – The growing point does not divide. Branches are develop from lateral buds lower down from apex. They are of two types –Racemose (Eucalyptus, mustard etc). 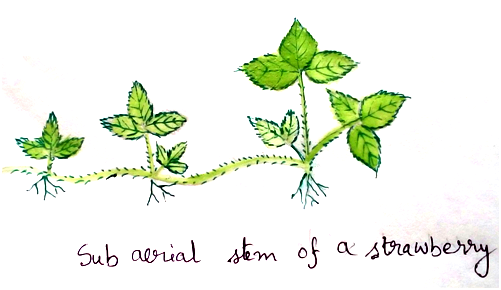 2. It holds the appendages according to their best position for benefit.

3. It helps in transport of water from roots to the leaves for photosynthesis.

4. On the other hand food produced in leaves is transported to different parts of the plant by vascular bundles called phloem.

5. In some cases stem acts as storage house for some plants. In potatoes starch is stored as food in stem. 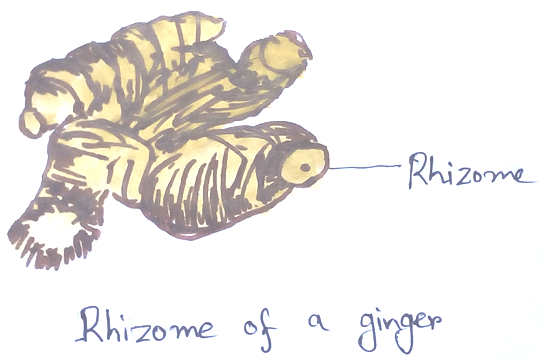 1. Stem tendril - They may be branched with scale leaves in the region of branching. They are of different kinds . They are –

2. Stem Thorns – They are stiff sharp structures which are formed for reducing transpiration and protection from animals. Thorns are generally axillary. Example- citrus, pomegranate, Bougainville.

3. Phylloclades – They are green, photosynthetic,often succulent stems of indefinite growth. It is an adaptation for dry habitats. The leaves are caducous. Example of phylloclades are Opuntia, Cocoloba etc. In opuntia each segments or phylloclades is a branch that arises in the axil of caducous leaf and possesses raised areas or areoles representing nodes. An areole has a leaf scar, one two spines and a number of stiff hair called bristles or glochidia.

4. Cladodes -  they are also called cladophyls. They are green photosynthetic stems of limited growth (generally one internode long) with leaves reduced to scales or modified into spines. Example of cladodes are –

In Asparagus the cladodes develop in cluster which are straight or curved, slightly flattened, pointed fleshy structures. Cladodes of Ruscus are leaf like borne in the axis of scales leaves.

From Stem and its Modifications to HOME PAGE