Red algae are known as Rhodophycae.

Algae are non-vascular, aquatic forms which possesses accessory spores for asexual multiplication and non-jacketed gametangial for sexual reproduction. But they do not have embryo forming stage. It includes in the kingdom plantae. According to presence of pigments algae can be divided into- chlorophyceae (green pigments chlorophyll is present), phaeophyceae (fucoxanthine for brown colour), and rhodophycae (phycoerithrin for red color).

Special Characteristics of the rhodophycae are mentioned below:

1. Maximum number of the algae are marine (except few are fresh water).

2. Some are color less and parasitic in nature that is they are unable to make their food themselves.

3. Rhodophycae do not have any motile stage and Thallophyta- in nature.

4. There structure can be unicellular, filamentous, parenchymatous and pseudoparenchymatous. Chloroplasts commonly discoid, without chloroplasts, endoplasmic reticulum.

6. Food is reserved as floridian starch formed in the cytoplasm, outside the chloroplasts.Mitosis closed,centrioles lacking, polar rings are present. Cleavage incomplete in most algae,presence of pit connection and pit plugs in most. 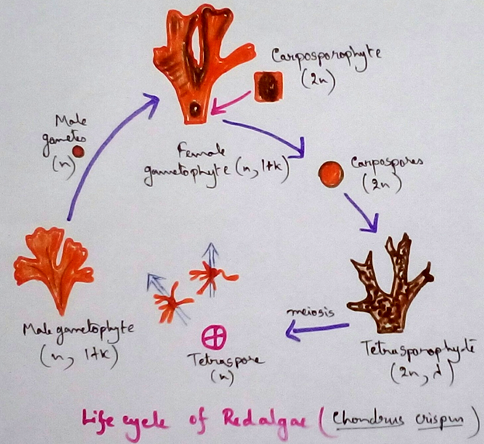 Economic importance of red algae are:

• Used as edible food – Some red algae like Porphyra or Laver, Rhodymenia, Chondrus or Irish Moss (Gracilaria, Gelidium) are used as food or food processing.

• Extraction of bromine – At first bromine was extracted from red algae called Rhodomela.

• Uses as adhesive – funori acts as an adhesive agent.

Questions and answers on Rhodophyceae:

In a majority of red algae, cleavage is incomplete. Subsequently a protoplasmic connection is established between cells. Soon the connection becomes closed by a proteinaceous stopper called pit plug.

From Rhodophyceae to HOME PAGE