We will discuss here about how the water vapours change into cloud, dew, fog, frost and snow.

When water vapours go up into the sky, the low temperature of the high altitude compels it to change into very tiny drops of water and cloud is formed.

To see the vapours change into water let us take an example suppose if we put some pieces of ice into a glass, tiny drops of water would be seen on the outer surface of it after some time. The water-vapours present in the air are changed into droplets of water due to coldness caused by the ice.

We know, conversion of vapours into liquid is called condensation. We can see by doing an experiment that the condensation of water vapours can be seen by throwing steam prepared in a kettle, on a cold glass surface. The steam changed into tiny droplets of water. From here we understand that steam condenses into water.

Some of the examples of condensation of water vapours are formation of clouds, frost, dew, etc.

In the high altitude where there is cold, the water vapours reaching there condense into tiny droplets of water. Masses of droplets float in the air and cloud is formed. When the droplets get bigger in size, they begin to fall down as rain. When the raindrops pass through very cold air they freeze to form small balls of ice, which fall down on the earth. These ice balls are known as hailstones.

In cold weather when the atmosphere becomes saturated with water-vapours, they condense into tiny droplets. If we notice we can see a smoke like thing, i.e. the clouds floating just above the ground. This is known as mist. Sometimes when the mist becomes too dense then we cannot clearly see the nearby things. Dense mist is known as fog. On cold nights, the air near the ground cools down. The water vapour in the air condenses to form drops of water on leaves and and grass. This is called dew. 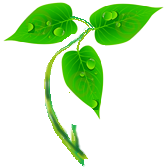 When it is too cold the dew freezes to form ice and this frozen dew is known as frost. Frost is very harmful for the crops.

Rain is necessary for the living beings and plants, but too much rain is harmful. Too much rain causes flood which destroy crops, plants, trees, houses and even sometimes take away lives too. When flood subsides, so many diseases spread due to decaying of plants and dead animals.

From Cloud, Dew, Fog, Frost and Snow to HOME PAGE