Passive Transport is a process by which transport of materials takes place across the cell membrane without expenditure of energy and is governed by the concentration gradient of the material between the two sides of the membrane.

Active Transport is a type of transport where the transport of material across the cell membrane of cause by the utilisation of energy. 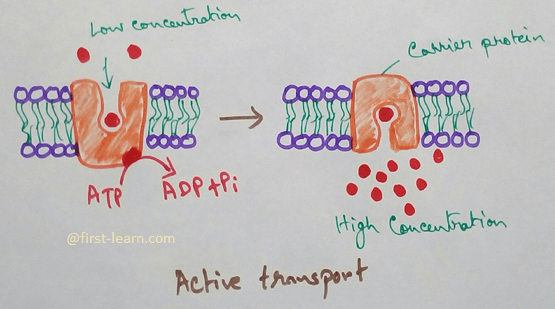 Definition of Diffusion: It is a type of physical process in which molecules or ions of a matter by virtue of their inherit random motion migrate from a region of higher concentration towards the region of lower concentration.

Examples of Diffusion: Process is observed in case of Oxygen and Carbon dioxide exchange in alveoli of lungs and water which Transport from the source towards the epiblema of the root in plants.

● Molecular Size: As rate of diffusion is inversely proportional to the size and weight of the diffusible molecules which are if bigger in the molecule slower is the rate of its diffusion.

● Temperature: Velocity of diffusion is directly proportional with the temperature because rise of temperature causes increase of the kinetic energy of the molecules and thus the molecular motion is increased.

● Distance: If the distance between the regions of higher and lower concentration are more then the time will be required more for diffusion and thus the diffusion rate is inversely proportional to the distance.

Significance of Diffusion in Plant Cells: Significance of diffusion in plants are exchange of gases through the stomata of leaves during intake of Oxygen and output of carbon dioxide in respiration and intake of carbon dioxide and output of oxygen in photosynthesis, transpiration of water vapour through the stomatal pore is also occured by the process of diffusion.

Passive absorption of salt or iron occurs by this process and translocation of food material also take place. The spreading of scent or Aroma from the flowers of some plants in the air causes by diffusion which attract insects and help in pollination.

Active Transport: This process is generally mediated by the career molecules present in the membrane heat never depend on the concentration gradient and may even take place against the gradient from lower to higher entry of a substance into the cell by this process is known as active absorption.

Location of Active Transport: This type of transport is observed during the intake of glucose within the cell or amino acids we etc by the cell. On the other hand the process of expansion of a material from the cell by expenditure of energy is called secretions. Examples- secretion of hydrochloric acid by the oxyntic cells of stomach or situation of hydrogen ion by the Renal tubular cells. There are three types of transport mechanism uniport symport and antiport.

Mechanism of the Transporters of Membrane:

Substances that are generally present in the extracellular fluid in minute quantities but are required within the cells in large quantities are observed by active transport process with the cost of energy expenditure. There are certain careers in the cell membrane which are Unlike the Ion channels they do not contain pores. Transport of proteins combined with the molecules that are to be diffused or observed and are then carried from outer surface of the cell membrane to the inner surface or vice versa. These two combined to form a complex then inside the surface of the membrane the substance to be observed is separated from the career and is released within the cell.The detachment of the substance and the career requires an enzyme and ATP source which are present in the cytoplasm of the cells. Accept the active transport requires an enzyme and expenditure of energy for Transport against concentration gradient.

Definition of Uniports: Uniports are those carrier proteins which transport only one substance in one direction. 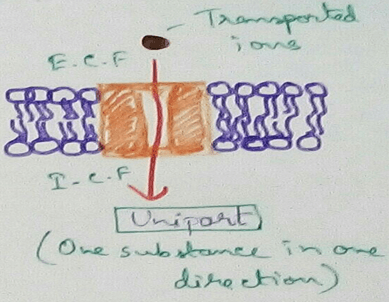 Definition of Symport: Symports are those carrier proteins that transport two substances at a time in the same direction. 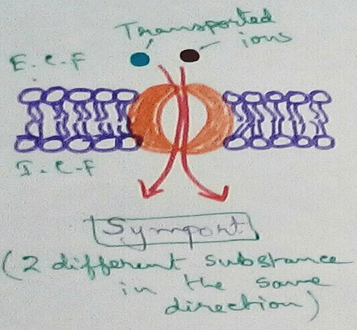 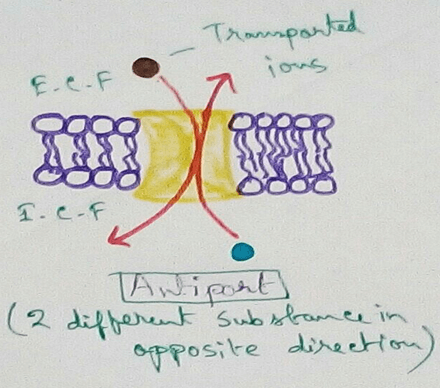 Bulk Transport: Cell membrane sometimes transport some substances in a bulk quantity into the self or outside the cell. In this process macromolecules towhole cell are transported by pinocytosis or phagocytosis. This mechanism of this process mediated transport do not need membrane bound careers but required energy the energy is required for contraction of microfilaments present in the peripheral cytoplasm which causes the plasma membrane to in resonate for this process. Beside this endocytosis, exocytosis, reversepino cytosis, podocytosis, rhopheocytosis  are the process where this mechanism is involved.

Comparison between Diffusion and Facilitated Diffusion:

Pressure Gradient - It is the difference of partial pressure of a gas across the cell membrane due to fit the gas diffuses through the membrane from the region of high concentration towards the region of lower pressure.

Electrical Gradient - It is the difference of electrical potential between the two sides of a cell membrane due to quit the ions diffuse through the membrane from the site of higher potential to the side of lower potential.

From Means of Transport to HOME PAGE