Bravery is one of the rarest and most well-mired qualities possessed by us humans. In the most adverse of situations, it is this undying spirit which makes us invincible and endows us with us the capacity to hope and change the world.

‘Fortune favours the Brave / Bold’ is a frequent translation of a Latin proverb which was historically used in the military in the Anglo- Saxon world and still used in the US Army and Coat of Arms of individual families and clans.

Fear is the most inhibiting of all factors. Throughout our lives, if there is one thing which keeps us from fulfilling our dreams, attaining our goals and pursuing our passions, it is fear, fear of being hurt, fear of failing, fear of social ostracism which makes us succumb, surrender and give up.

Success, on the other hand comes to those who shed their fear and persevere against all odds beyond the limits of fear and are not wary on entering the unknown terrain and accept the Change. Human beings have to take up the risk because success does not come to sitting ducks. People achieve success because they are brave enough to remove the obstacles from their way and step ahead and beyond. We must never apprehend failure. Instead we must have the courage to face our failures and continue to apply further effort to better ourselves with zeal and enthusiasm. 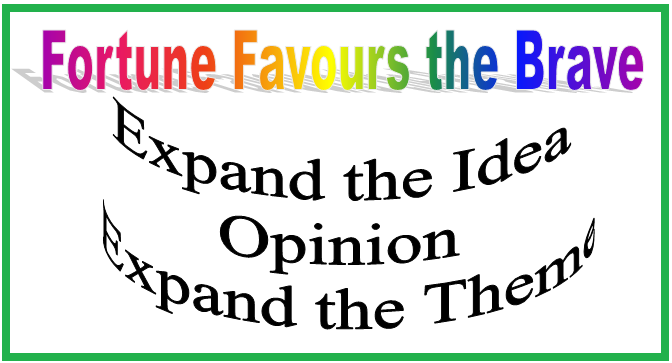 Some of the most world changing milestones have been achieved by people who have remained undaunted in the face of calamity. For them what does not kill, makes one stronger. So, they persevere and in their success lies the well-being of million others.

Tales of our freedom fighters, who chose not to stay behind the curtain and live a contented life, instead applied themselves whole heartedly for the ultimate martyrdom inspire and ignite others. So did people who made landmark discoveries and inventions. All of them shrugged away the comfort offered by their known surrounding and ventured into the unknown. It was their courage and fortitude which helped them plod ahead in the journey and ensured their success ultimately

Lately, I was reading the biography of Arunachalam Muruganantham, more popularly known as Padman and was struck by the resolute determination and courage of the man for whom social ostracism and lack of luxurious lifestyle were no deterrent. He applied himself for the benefit of the larger good and ultimately is instrumental in changing the lives of millions impoverished Indian women with his dream.

In today’s date, when the world is becoming highly competitive taking bold and tough decisions with complete understanding of the situation in hand shall construe to be a brave decision. More the risk, more potentially rewarding the situation is. However, it is pertinent to note here that bravery does not constitute foolhardiness. One must be pragmatic, weigh the pros and cons and if need be change one’s course and strategy, as per the need of the hour to ensure victory.

From Fortune Favours the Brave to HOME PAGE

Have your say about what you just read! Leave me a comment in the box below.
Follow @FirstLearn