Classification and Nomenclature of Enzymes

Introduction - In earlier days enzymes were called by some ambiguous and uninformative name such as – ptyalin, zymase, trypsin, errosion etc. Later their name are done by the addition of suffix 'ase' after the name of the substrate on which they act.

Types of Enzymes - There are different types of enzyme according to their reaction and catalytic power International Union of Biochemistry divided into six major groups. This groups are follows -

1. Oxidoreductase - This type of enzymes are associated with the oxidation reduction reaction. This enzymes are of two types . They are – (i) Oxidase (ii) Dehydrogenase.

(i) Oxidase - This type of enzymes causes addition of oxygen to the substrate. Examples of this enzymes are amino acid oxidase, cytochrome oxidase etc.

3. Hydrolases - This group of enzymes are associated with the hydrolytic reaction of compound. Examples of this group are amylase, peptidase,lipase etc. These enzymes causes breakdown of larger molecules into smaller ones by addition of water molecules and split off specific co valent bond. This process is called hydrolysis.

4. Lyases - This group of enzyme causes removal of groups from the substrate or addition of group to the substrate. This is occurred by the process called hydrolysis, oxidation, reduction etc. Examples of this enzymes are – Carboxylase, fumarase, agrinosuccinase, decarboxylase etc.

5. Isomerase - Enzymes of this group are associated with the conversion of isomers. Examples are Phosphohexose isomerase, triose phosphate isomerase. 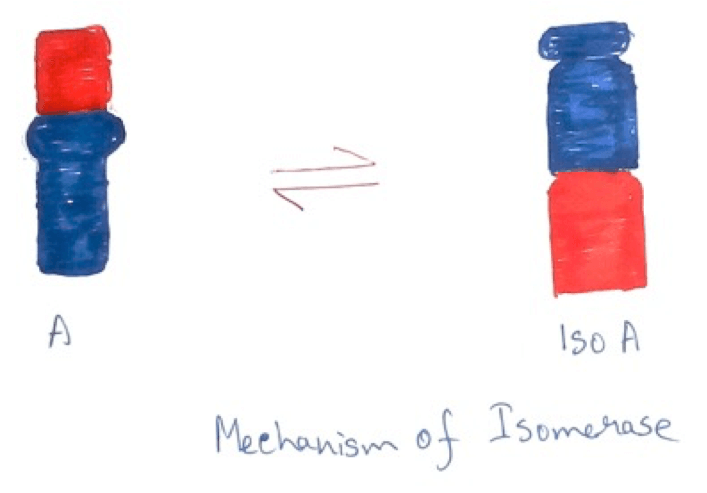 6. Ligase or Synthetase or Synthase - In this group of enzyme ,it catalyses linking of two compounds by energy requiring reactions. Examples of this type of enzymes are glycogen Synthase, fatty acid synthase etc.

Nomenclature of the Enzyme - According to the international system of enzyme classification- Name of an enzyme is considered both the substrate on which it acts and the type of reaction it catalyses.

The ending of the enzyme name will be with ‘ ase’ .

Nomenclature explain with example- lactic dehydrogenase is an enzyme . Whose first part is formed from lactic acid as it acts as substrate and this enzyme is associated with dehydrogenation means oxidation . Thus the second part of the enzyme name dehydrogenase (as -ase will be added to the end).

Questions and Answers on Classification and Nomenclature of Enzymes:

1.What is the function of lipase?

2. What does protease do?

It splits the protein.

3. What is the role of amylase?

This enzyme splits the amylum or starch.