Cytoskeletal structures are fibrous or fine tubular structures that consists of supportive structure of cell. The term cytoskeletal is coined by Koltzoff in 1928.

Definition - The protein made, rigid, tubular and filamentous or fibrilar structures that forms the frame work of cytoplasm, give a shape to the cell and help in cellular motions are collectively called cytoskeleton or skeleton of the cells.

Functions of cytoskeleton structure- give shape and form the frame work of the cell.

1. Microtubules –  Microtubules are protein made, fine, long, hollow but rigid, unbranched tubular structures present in the cytoplasm of the cells.

Microtubules were discovered by De Robertis and Franchi in 1953 in nerve axon and name as neurotubules. This term was coined by Slautterback in 1963. This are unbranched tubules of indefinite length. Thickness of the Microtubules are 25 nm and the diameter of the core are 15 nm where boundary is formed of 13 helically arranged protofilaments of alpha and beta tubulins. Lateral projections are developed by establishing cross linkage. Microtubules grow from nucleating region. Tips of the Microtubules are can grow and shorten quickly. GTP, Calcium ion, magnesium ion, calmodulin protein are required for assembly. These are the basic structure for the formation of spindle apparatus, Centrioles, basal bodies, cilia, flagella. They are also present in other cellular structures like sensory hairs, nerve processes ,sperm tail etc. Main function of the Microtubules are to provide shape to the cell, polarity to cells. It is absent in prokaryote, amoeba, slime moulds. Only exceptional is Anabena which is a prokaryote. Help in the formation of cilia, flagella and their movement. They also form spindles during cell division and help in the migration of daughter chromosome towards pole. 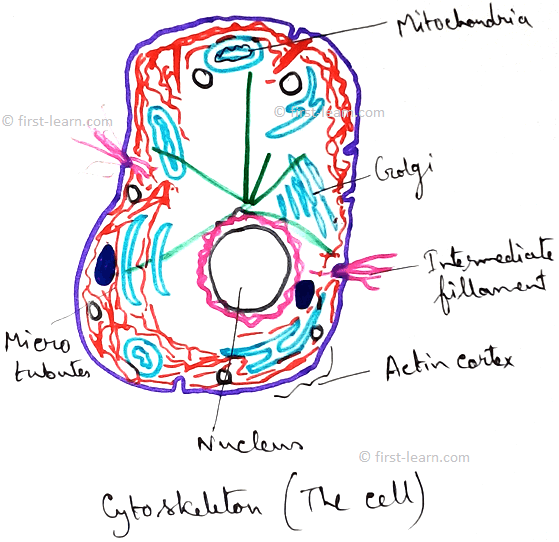 Paleviz et al in 1974 discovered microfilaments. This are double helical cylindrical rods and filaments of actin. It is occurred in both muscular and nonmuscular cell. Microfilaments have an indefinite length and diameter is 5 to 6 nm. These can be occur in sheets, hexagonal bundles and three dimensional microtrabecular lattice, take part in cytoplasmic streaming, sol-gel changes by the formation of breakage of cross linkage, membrane dulations, microvilli, cleavage, amoeboid movements, muscle movements etc.

From Cytoskeletal Structure to HOME PAGE