Nucleus - Robert Brown in 1831 first discovered a double membrane covered protoplasmic body that contains hereditary information. A cell usually contains a single nucleus (uninucleate, monokaryote). Multinucleated form in animal cells are called syncytium and coenocytic in plant cells. Nucleus is the largest among the cell components and it plays role in different controlling activities of cell.

In 1953 Hamerling proved that nucleus is the store house of hereditary information of the organisms. He did his experiment by the help of grafting experiment in Acetabularia.

It is the master organelles as it controls all cell activities. Chemically it contains DNA (9-12%), basic proteins (15%), no basic proteins ( acid protein, neutral protein, enzymes - (65%), RNA (5%), lipids (3%),  minerals (traces).Phosphorus present in some DNA, RNA and some protein. Nucleus is made up five parts-

Nuclear Envelope - Nuclear envelop is made up of two membranes which is separated by 10 to 70 nm perinuclear space. The outer membrane have interconnectionswith ribosomes and endo plasmic reticulum. Nuclear envelope contains a large number of pores whose diameter are of 200- 800anstrom and they are 1000 to 10000 in number. This pores may contain Diaphragm ,septa ,annuli,blebs or microspore surrounded by nine peripheral microspores. For movement of substance there is nucleoplasmin which is situated in the central microspores or channel. 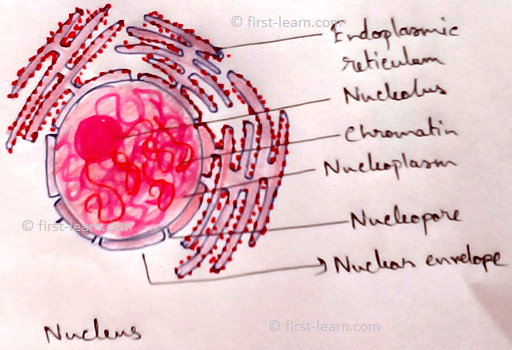 Nucleoplasm - Strasburger in 1882 discovered this. He described it as nuclear sap, karyolymph, karyoplasm which is a colloidal complex that fills the nucleus. Nucleoplasm contains raw materials for DNA and RNA.

Nuclear Matrix – It is a network of proteinaceous fibrils which is thickened towards the outside to form fibrous lamina. Haris and James discovered that (named) in 1952 . It is also called nuclear lamina in contact with inner membrane of nuclear envelope. This proteins are acidic in nature.

Chromatin - Flemming discovered chromatin in 1879. It is a fibrous hereditary material formed association of DNA -histone complex.Chromatin fibres can be divided into two types. That are narrow( 30-80 anstrom elongated lightly stained transcriptionally active euchromatin and broader (250 anstrom or more , darkly stained, transcriptionally inactive heterochromatin). Constitutive heterochromatin occurs in all cells and in all stages including chromosomes. It consists of repetitive bases . Whereas Facultative heterochromatin is formed in certain cells for inactivate certain genes.One X-chromosome in human female becomes Facultative heterochromatin during early embryogenesis. It then becomes normal in oocytes and Barr body is developed for this. Chromatin is called the folded nucleosome containing DNA and histones associated together to form DNA chains. During the time of nuclear division chromatin fibre of chromosome folded variously to produce chromosome.

Nucleolus - In 1781 it was discovered by Fontana and in 1840 the name was given by Bowman. It is roughly rounded darkly stained structure which is attached tochromatin at specific spot called nucleolar organiser region or NOR. Nucleolus contains four parts – amorphous,fibrillar , granular and chromatin.Fibrillar and granular both parts are formed of RNA and protein. It is the site for elaboration of rRNA and synthesis of ribosome.

From Explain about Nucleus to HOME PAGE