Endoplasmic Reticulum - It is discovered by Porter et al and Thompson in 1945. The name was given by Porter in 1953.It is a system of membrane lines channels found in all eukaryotic cells except mature erythrocytes. It constitutes of more than 30 to 60% of the cells. It is known as different name in different organelles. This are sarcoplasmic reticulum in muscle cells, myeloid bodies in at the base of retinal pigments cell, nissl granules which are believed to be formed from E.R.

Structure of Endoplasmic Reticulum - It is a membrane bound organelles whose membranes are thinner than other cell membrane. It is often connected with the outer membrane of nuclear envelope and open at plasmalemma. It is made up of tubules in adipose tissue, few vessicles in spermatocytes, reticulocytes and is best developed in metabolically active cells called liver, pancreas ,plasma cells, intestinal cells, fibroblasts. Endoplasmic reticulum is made up of three parts –cisternae, tubules and vessicles. Membranes of endoplasmic reticulum  contains ribosome and is called Rough endoplasmic reticulum (RER). This attachment between ribosome- ER is done by glycoproteins (ribophorin 1 and ribophorin 2). RER often contains minute pores below ribosome to pass and synthesised polypeptides into the lumen for transport ER without attached ribosomes is called agranular or smooth endoplasmic reticulum (SER). It is associated with synthesis of vitamin, carbohydrate, fat, sterol and detoxification.RER is abundant in cisternae, and in the cells that are engaged in production and excretion of proteins (plasma cells, goblet cells, pancreatic acinus cell and in certain liver cells). Broken pieces of endoplasmic reticulum are appeared as microsomes. 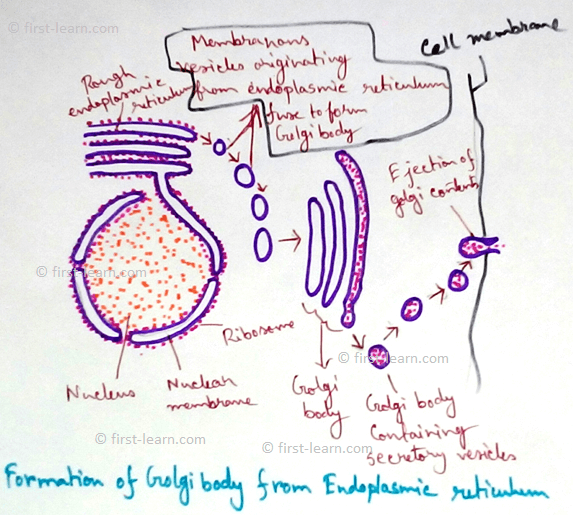 Enzymes found in Endoplasmic Reticulum - Enzymes are found in two different areas of the endoplasmic reticulum. They are occur in – cytoplasmic surface (P-450, cytochrome b5, some reductase and nucleotidase), luminaries surface (glucose 6 phosphatase, peptidase, beta glucoronidase).

Golgi Apparatus - This organelles is a complex organisms which is made up of membrane like stack of cisternae , network of tubules , vessicles and vacuoles that were first discovered by George in 1867 and studied by Camillio Golgi in 1898 in cells of Barn Owl and Cat through metallic impregnation techniques.

Structure of Golgi Apparatus - Golgi apparatus is found in ever eucaryotic cell except RBC and sieve tubes. It is also absent in prokaryotes and sperm cells of seedless embryophytes. In plant cell it is made up of different isolated​ units called dictyosome but in animal cells it occurs in single compact or loose complex. A unit of Golgi complex is called golgisome. Golgi apparatus are surrounded by a clear zone of exclusion in which mitochondria, ribosome, plastids , storage granules are absent. A golgisome or dictyosome has a central stack which are 3to 10 curved parallel membrane bound narrow called cisternae. Cisternae​ are interconnected with each other. Golgi apparatus has two faces one is distal maturing and proximal forming face (convex or CIS face). Cis face receives materials from endoplasmic reticulum and cytosol while concave face maturing face gives out large Golgisome vacuoles and small vessicles having transformed materials. Vessicles are developed from tubules.Membranes of proximal cisternae are thin (50 to 60 angstroms).They progressively become thick towards the distal side ,reaching a thickness of 75 to 80 anstrom. It receives materials from cytosol and endoplasmic reticulum in the form of transitional vessicles. 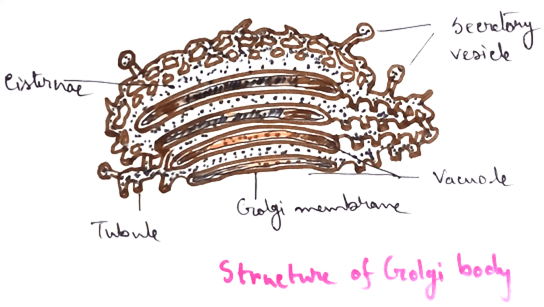 Lysosome - It is also called suicide bags or disposal units. It contains hydrolysis enzymes and surrounded by single membrane.This are small vessicles whose size is 0.2 to 0.8 micrometres.It was discovered by Christian de Duve in 1955 but we’re named and observed under microscope by Novikoff in 1956.They are most abundant in phagocytic cell (WBC), chondroclasts and osteoclasts. This are formed by Golgi apparatus and contain some (40 types ) acid hydrolase for digestion of various materials (nucleases, proteases, lipases, glucosidase, phosphatases, sulphatases). Membrane of lysosome is strengthen by cortisone, cortisol, anti histamine, heparin, chloroquine and a type of cholesterol.They are known as membrane stabilizer.  It becomes fragile in absence of oxygen or presence of vitamin A, vitamin E, progesterone, testosterone,bile salts, high energy radiations. This are called membrane labilizers. Lysosomes are useful in metamorphosis (eating away larval organs), removal of obstructions, intracellular scavenging, osteogenesis, hormone elaboration, fertilization etc. Lysosomes causes inflammation and collagen synthesis. Lung fibrosis is produced in same way. In many plants lysosome functions are performed by spherasomes and vacuoles. 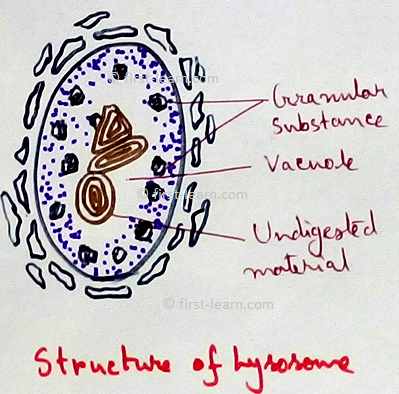 Vacuoles - These are noncytoplaamic sacs that are separated from the cytoplasm by membrane.  Vacuolea are mainly found in plant cell. But in animal cells it is also observed very few in number. Plant vacuoles are bigger in size than animal cell vacuoles. Vacuoles are of four types-

1. Sap Vacuoles – These are enclosed sap or water with dissolved inorganic and organic substances. A sap vacuole is surrounded by a membrane which is known as tonoplast. Plants contain this in large size and animals cell in small size and numerous in number.

These vacuoles maintain osmotic pressure and turgidity .It is filled of usefully and waste materials.

2. Contractile Vacuoles - This occur in some simple fresh water forms organisms like Amoeba, Paramecium, Chlamydomonas.These vacuoles are surrounded by a few feeding canals . It regulates osmoregulation and excretion.

3. Food Vacuoles - It is a complex of lysosome and phagosome and digestion occurs inside them.

4. Gas Vacuoles – It is also called pseudovacuoles. Gas or air vacuoles occur in some prokaryotes. Each of them is made up of large number of gas vessicles which are hexagonal and submicroscopic. A gas vessicles is surrounded by a thin protein membrane . It stores metabolic gases and take part in buoyancy regulations.

From Endomembrane System to HOME PAGE