Definition – Cilia and flagella are hair like micro tubular organelles projecting from the cell surface into the extra cellular medium and are concerned with cell motility.

Location of Cilia and Flagella - Only in some specific types of cell specifically in prokaryotic plant and animal cell they are observed. Eukaryotic cells are generally lack of cilia and flagella. In case of plants cilia are rare, whereas flagella are observed in the gametes of algae, aquatic fungi, bryophytes, pteridophytes, gymnosperm.

Origin of Cilia and Flagella - Both of these are originated from the basal bodies which in turn originate from the centrioles. 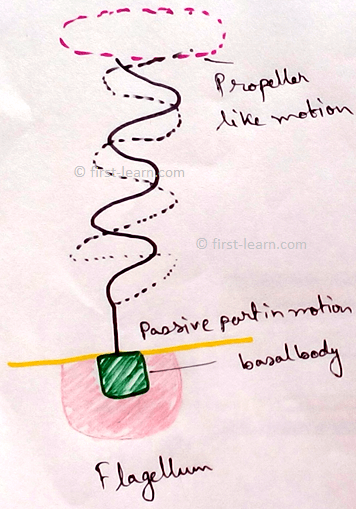 1. Shaft -  It consists of basic microtubular structure called axoneme which is embedded in ciliary matrix and surrounded by ciliary membrane.

2. Basal Bodies - this part is under lying the cell membrane from where the cilium and flagellum originated. It is also called blepharoplast. It is composed of 9 peripheral microtubular structure.

3. Ciliary Rootlets - These are specialized striated structure present in rootlets in some animals that originated from the basal body and penetrate into the deeper layer of the cytoplasm. Ciliary rootlets may serve as an anchor for the basal body. It is very common in ciliated epithelium of lower animals and are absent in ciliated epithelium of mammals and the ciliated protozoans.

Types of Cilia and Flagella:

Cilia can be of two types. They are –

Stereocilia - they are nonmotile and are lack of microtubular structure.

Types of flagella are two types –

Whiplash type - they do not contain lateral whip like appendages.

Functions of Cilia and Flagella - Both of these are associated with mainly locomotion. Different functions are –

1. Locomotion - Cilia and flagella both help in locomotion of invertebrates.

2. Feeding - Ciliary current carry the food particles which present in external fluid medium towards their digestive system for feeding of aquatic animals.

3. Respiration of Circulation - Animals that are lack of true blood vascular system, the coelomic fluid is kept circulating by ciliary movement.

5. Cleansing - Cilia in some places such as epithelial lining of vertebrates sweeps out the undesirable particles by and help to prevent entry within body.

6. Sensory Function - cilia bends to the auditory and vestibular receptors by the the pressure of fluid which bathe them to elicit respective sensation.

Questions and Answers on Cilia and Flagella:

From Cilia and Flagella to HOME PAGE