Definition of Centrosome - Centrosomeis a more or less spherical mass of dense cytoplasm situated close to the nucleus and contains a pair of cylindrical bodies which are concerned with spindle formation during cell division. In 1888 Boveri first discovered these organelles and gave its name.

Chemical Composition of Centrosome - Chemically these are made up of protein, carbohydrate, lipid, nucleic acid (RNA and probably DNA). 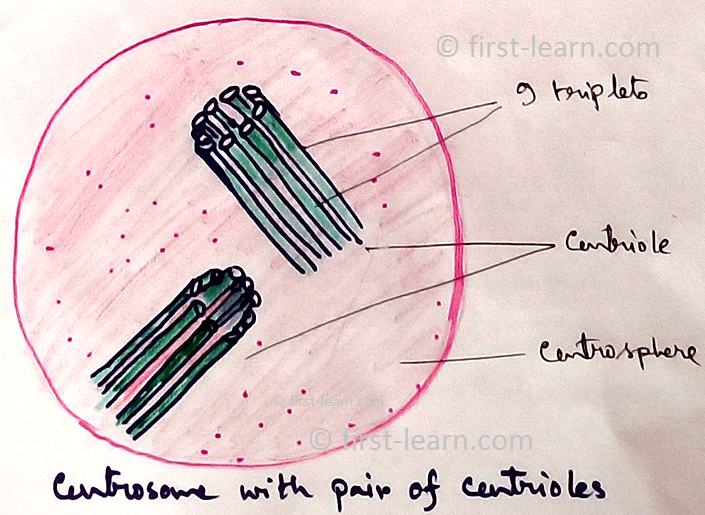 The wall of Centrioles are made of 9 longitudinally arranged bundles of microtubules. Each of them is connected to the adjacent one by a central rod by means of protein fibres.It seems like a cart wheel. Microtubules bundles are radially equidistant from the adjacent ones . Each single bundle is composed of set of three microtubules called triplet microtubules. They are parallel to each other and are arranged tangentially to the circumference of the centrioles. Each of them has a diameter of 250 angstroms and wall is made up of 13 fillaments of globular proteins with a diameter of 45 angstroms. Some of the spheroidal bodies known as centriolar satellites encircle the whole centrioles in two circumferential rows.

Definition of Centrioles - Centrioles are pair of cylindrical shape hollow organelles which is associated with spindle formation during cell division and is a part of centrosome. 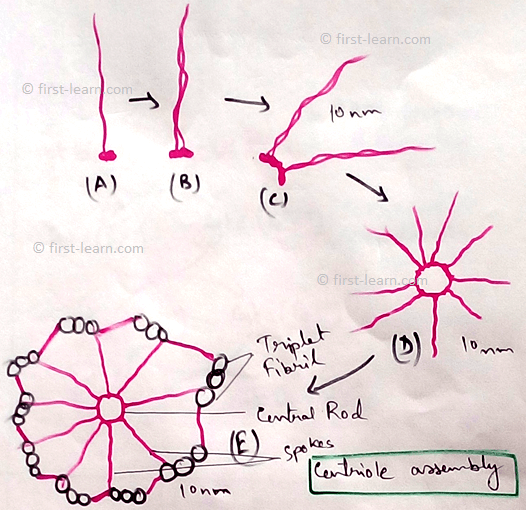 Functions of the Centrosome:

Functions of Centrosome are –

1. Formation of Centrioles - Centrioles are formed from the Centrosome during cell division.

2. Plays role in cell Division - At the time of cell division ,the centrioles form spindle fibres that help in migration of daughter chromosome towards the pole.

3. Movement of Locomotion -  Centrioles help in the formation of cilia,flagella,tail of sperms. These are made up of microtubules and function as organs of movement and locomotion of certain cells.

From Centrosome and Centrioles to HOME PAGE