This in 1954 first was the first to observed microbodies. Microbodies are spherical or oval in shape with the diameter of 0.2 to 1.5 micrometer. It has outer covering with lipid and lipoprotein membrane. It contains different enzymes for catalase but do not contain any genetic materials. Thus they are unable to replicate. It participates in the preparatory and intermediate stages of biochemical reaction. It also causes degradation of alcohols, fats and amino acid. Microbodies are associated with detoxification as it contains different hydrolase, catalase enzymes for detoxification. It also contains the enzymes for photorespiration of plants.

Definition - Microbodies are single membrane bound, small vesicular bodies that found both in plant and animals, formed due to dilation of the endoplasmic reticulum (may remain joined). 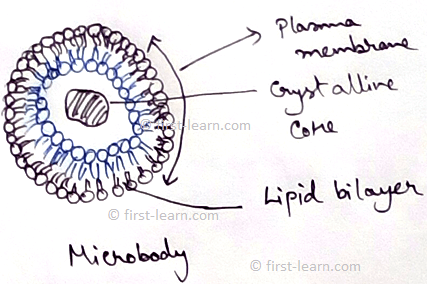 Microbodies are single membrane bound small cell organelles which take part in the oxidation reactions, those are other than respiration. Microbodies are often possesses a crystalline core and granular matrix. These are of two types –peroxisome and glyoxisomes.

1. Peroxisome - In 1965 De Duve et al and in 1969 De Duve observed that the microbodies contain enzymes for peroxides synthesis. These include-

• Enzymes that are peroxide producing such as peroxidase, urate oxidase or uricase, amino acid oxidase.

Location of peroxide - Peroxisomes found widely in animal cells, protistans, fungi, eukaryotic algae, bryophytes, pteridophytes and higher plants. It is quite common in photosynthetic cells of plants. Beside this it is found in liver, kidney etc.

Function of peroxisome - They serve different types of function. These are –

In mesophyll tissue peroxisome interacts with chloroplasts and mitochondria to take part in photorespiration. This was observed by Tolbert et al in 1969. As the product glycolate is produced, peroxisome contains glycolate oxidase for metabolism of glycolate. The number of peroxisome can be 70 to 100 per mesophyll cell.

2. Glyoxisomes - Beevers in 1963, Briedenbach in 1967 observed glyoxisomes. These microbodies are observed in fat rich plant cells which take part in beta oxidation of fats and these microbodies also have performance in glyoxylate cycle. These enzymes are found in oil rich endosperm tissues of seeds. It may aid in germination of oil bearing seeds. It also involved in metabolism of stored lipids by conversion of fat into carbohydrates.Glyoxisomes possesses the enzyme catalase.

3. Glycosome - These are membrane bound organelles which contain enzymes and protein for glycogen metabolism. It is mainly found in liver. These enzymes are associated together to enclose in a molecule called glycosome. It is mainly using in drug therapy. It has specialized type of keratinoplast.

4. Hydrogenosome - It is universally accepted that this organelles was evolved from mitochondria. It is a membrane bound organelles which is generally found in fungi, ciliates, trichomonas. It can produce carbon dioxide, acetate, hydrogen, ATP etc. It also contains super oxide dismutase, dehydrogenase etc. It is mainly observed in anaerobic organism.

From Microbodie to HOME PAGE