In 1931 Michaelis Menton proposed that for catalization of enzyme reactions, the substrate (S) first binds with the enzyme (E) to form a very unstable enzyme substrate (ES) complex. The ES complex then immediately dissociates to liberate the enzyme the enzyme which remains unchanged and the product are formed due to the result of the change in the substrate.

An enzyme catalyses the reaction by lowering the activation energy for the reaction, here the thermal energy is required to bring the chemical changes in the substrate molecule so that the reaction can occur at lower level energy level. Formation of ES complex by binding of enzymes-substrate is essential for enzyme action. This occurs by the association of colloidial property of Brownian movement of the enzyme molecules. It can brings protein of colloidial nature and their molecules exhibit a random zigzag Brownian movement.As a result of the movement, collision occurs between enzyme and substrate molecules and Enzymes-substrate (ES) complex is formed.

Each enzyme has a precise place on its surface where the substrate molecule becomes attached to form the ES complex. This site is known as active site or catalytic site of the enzyme as this part of the enzyme responsible for catalysing the reaction.

There are two theories about the mode of action. They are –

1. Lock and Key Theory – In 1894 Template Theory, Emil Fischer describe the active sites of the enzyme which have a specific geometric shape wherein the substrate molecules fit in just like a key in a particular lock which form a temporary enzyme- Substrate complex. Evidences suggest that according to hypothesis only a small amount quantity of enzyme 1:100000 is required. This also remain unaffected which are reused again. Increase of substrate concentration or enzyme concentration increases the rate of reaction. The complex which formed by the combination of substrate and complex are observed by crystallography or absorption spectra. 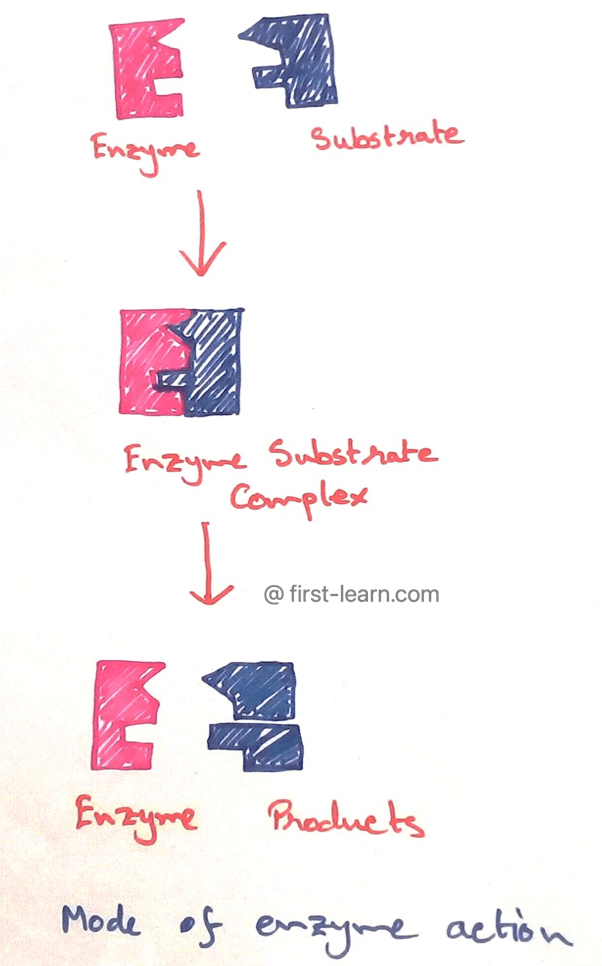 2. Induced Fit Theory - In 1959 Koshland describe the active site of the enzyme which possesses two groups. They are buttressing or supporting and catalytic. When the substrate get associated with buttressing region then the active site get changes it’s configuration so that catalytic group comes to lie opposite area where the substrate bonds are changed. The catalytic group weakens the bonds of the reactants by electrophilic and the nucleophilic changes. Some evidence suggest the confirmational changes during formation of enzyme substrate complex have been observed by X ray diffraction and optical rotation analysis.

From Nature of Enzyme Action to HOME PAGE