Cell Envelop and its Modification

1. Glycocalyx - It is located as an external covering around the cell membrane of some animal cell which is made up of glycoproteins -type of mucopolysacharides and glycolipids. Sometimes it is thought to be secretory product of cytoplasm. If the glycocalyx are very thin layer then it is called slime capsule. In case of prokaryotic cells where glycocalyx are thick in layer it is called capsule. This is observed in Prokaryotic cell during adverse environmental conditions.

* It provides mechanical protection to the cell.

* It provides micro environment of the cell.

* It is also associated with cell recognition.

* It is also associated with antigenicity to the RBC (Red blood corpuscles). 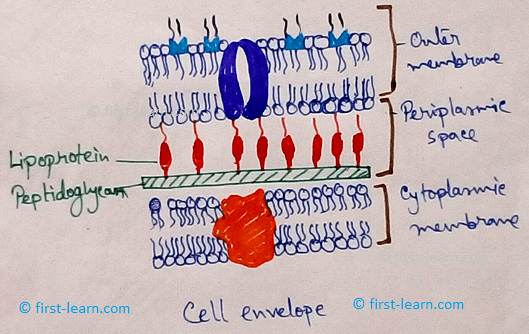 2. Cell wall - Cell wall is located outside the cell membrane of plant cells. It is a type of thick, rigid,non living covering made up of carbohydrates like cellulose, hemicellulose, pectin, lignin, suberin, etc. It is made up of three layers. They are –middle lamellae, primary wall, secondary wall from the outside to the inward. Plasmodesmata are observed as the cell wall contains different pores through which cytoplasmic connections are established between the adjacent cells.

* It maintains the shape of the cell.

* It provides mechanical strength to the cell.

* It also help in the exchange of materials between cytoplasm and the surrounding fluid of the cell.

* In some cells it acts as water proof layer and conservation some cells.

* It gives shape of the cell.

* It also provides protection to the cytoplasmic organelles.

* Maintains the excitability of the cells by making connections between the cell.

* It also gives origin to the membranous organelles.

Different types of cell envelope modifications are observed in mainly in prokaryotic cells. Prokaryotic cells include bacteria. We can stain bacteria by Grams staining.

According to the type of crystal violet gram staining Prokaryotic bacterial cell can be divided into two- gram positive and gram negative.

Pili - this are shorter than flagella and longer than Fimbriae associated with genetic material transfer in bacteria.

Fimbrae - Fimbriae are short whip like structure which help the bacteria to adhere with surface of different materials.

Flagella - this are long thin tube like structure associated with locomotion and sensation in prokaryote.

From Cell Envelop and its Modification to HOME PAGE