Definition of Ribosome: Ribosome is the organelles which is associated with protein synthesis. It is made up of two subunits. The larger one is spherical in shape and the smaller one is oval in shape. Ribosomes are attached with the endoplasmic reticulum and formed rough endoplasmic reticulum. As we know many things of the cell which are formed from protein are -enzymes, hormones, biomolecules, cell membrane, Cytoskeletal etc.

Definition of Cell Inclusions - The non living matters scattered in the cytoplasm are called cytoplasmic inclusions of ergastic substances or deutoplasm. 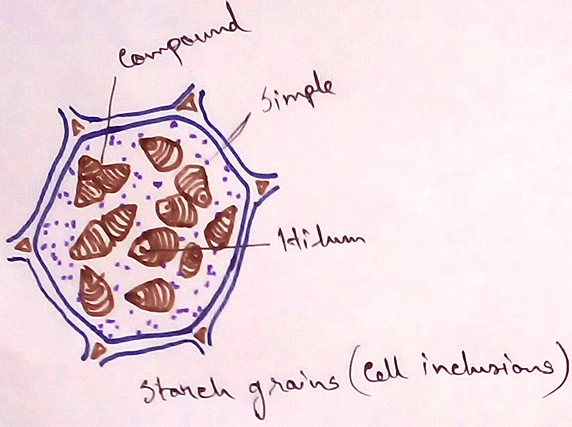 1. Stored Food - Living cells of plants and animals can not store large quantities of food material in simple (low molecular weight) and soluble forms like glucose because that would lead to a state of osmotic imbalance. This is the reason that simple food lead to conversion of large molecules (e.g. glycogen, starch) that are stored as reserved food in the cell. These do not create osmotic imbalance. The stored food can be divided into three types-

Fat - These are compounds of fatty acids and glycerol. In plantsabundance of oil stored in seeds such as mustards, nuts, castor etc and crops like coconut. In animals it is stored in adipose tissue and liver cells.

Proteins - Protein is made up of amino acids which are not stored cytoplasmic inclusions. In animal cell it is present as Cytoskeletal. Plant cell contains proteins grains, crystalloid, aleurones. 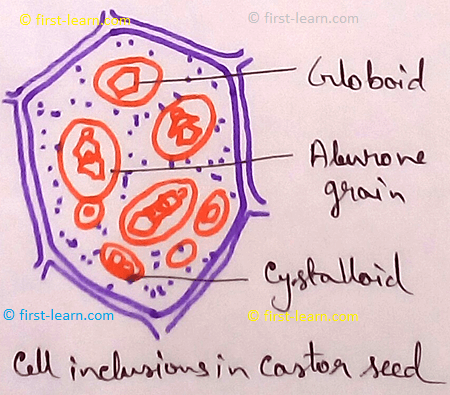 The main secretory inclusions of the plant cell is necter composed of sugar. This is found in the cells of the flower and attracts by the insect.

3. Excretory Matter - Due to metabolism some toxic substances are produced within the plants body. It should be removed quickly from the body as it is toxic for the plants body. Plants do not have any specific excretory organ so the excretory products are stored in different parts of the plant and it is removed from the body with time. Excretory products are –

4. Pigments - Various cells of the plants may produce or accumulated which make the cells coloured. The main pigments of the those are stored in plants are chlorophylls and carotenoids.Pigments are found in plastids.

In animal cell haemoglobin and melanin pigments are found. These pigments are stored in the cells in considerable amount. Melanin is dark coloured pigments and found in skin, hair, eyes etc.

From Ribosomes and Inclusion Bodies to HOME PAGE