Definition of Cell Cycle: Cell cycle is the entire sequence of events happening from the end of one nuclear division to the beginning of the next.

In 1989 Albert et al denoted three major cycles of the cell cycle. A. Chromosomal cycle: DNA synthesis alternating the mitosis, such as the time when DNA undergoes replication before they are actually separated, B. Cytoplasmic cycle where the cell growth alternates with cytokinesis such as the components of the cytoplasm is duplicated the nucleus get divided. C. Centrosome cycle where centrosome duplicates prior to the mitotic division.

Time Required by Cell Division - Time taken by cell cycle to complete one cycle and starts another cycle differ from one organisms to the other. Among the entire time maximum time is occupied by the interphase and the little time is needed for the rest of the division because in this phase the cell takes up all the sorts of preparation for cell division. Such as in mammals, 18 hours is required by the cell. In which 17 hours are taken up by the interphase whereas 1 hour is the resting of the division.

Cell cycle is made up of different phases. They are interphase and mitosis phase.

Interphase - It is a stage between two mitotic cell division that takes place during the various physical and chemical changes for the preparation of the cell division of eukaryotic cell .

Sub division of the interphase is divided into 3 substages:

Mitotic phase- It is the division phase where the parent cell divides once and giving rise to identical daughter cells with same chromosome number with similar forms and characteristics feature is called mitosis.

1. It is observed in somatic cells of eukaryotic organism.

2. In lower animals during regenerative growth mitosis is observed.

3. If the parts of the plant get damaged then their healing of wound is occurred by mitosis.

4. When the embryo is developed due to fertilization of haploid male and female gametes, they time the cell with diploid chromosome undergoes mitotic cell division to increase the number of cells in the embryo and pass through Marula, blastula, gastrula etc. It rises in cell number and give birth to the multicellular organism called embryo, later individual organism. 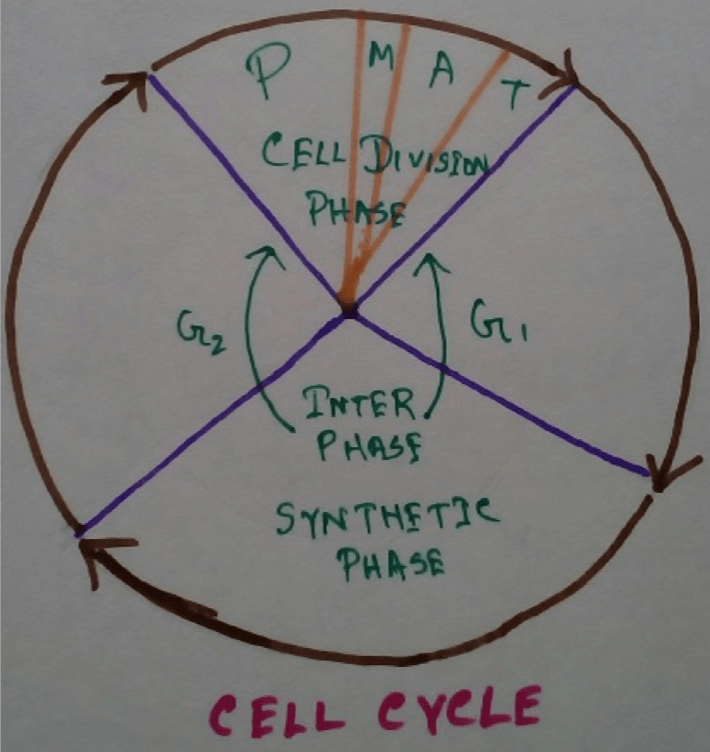 Mitotic cell division mechanism can be divided into two phases –

From Explain about Cell Cycle to HOME PAGE