Importance for Meiosis: meiotic cell division is associated with the conservation of the chromosome number of the species. It influences the adaptation and evolution of organisms. Variations are observed in new offspring.

1. Zygotic or initial meiosis - This the process of meiosis which takes place immediately after the formation of zygote by Sunday. It is observed in lower plants like diatom, certain fungi and sporozoa.

2. Gametic or terminal meiosis - Process of meiosis occur at the time of gamete formation (spermatogenesis and oogenesis). It is observed in lower plants and higher animals.

3. Sporic or intermediary meiosis - This type of meiosis occurs at the process formation in lower plants as well as flowering plants by microsporogenesis.

3. Due to the disbalance of nucleic acids and certain hormones.

4. When there is increase in the amount of DNA and RNA.

First meiotic division is consists of prophase I, prometaphase I, metaphase I, anaphase I, telophase I. This subphages are associated together to called karyokinesis. After karyokinesis or nucleus division, cytoplasm division or cytokinesis takes place.

Prophase I is also made up of leptotene, zygotene,pachytene, diplotene, diakinesis sub stages. 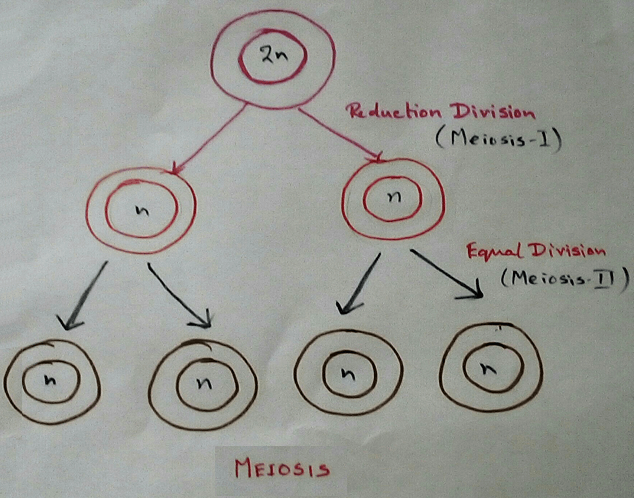 1. What do you mean by cytokinesis?

Cleavage and division of cytoplasm is called cytokinesis.

2. What do you mean by meiocyte?

Any cell which is under going meiotic cell division is called meiocyte.

3. Why there is combination of characteristics observed in the meiosis?

Combination of characteristics are observed due to the crossing over which takes place during pachytene sub stage of first meiotic cell division.

4. What is synaptic knot?

In case of plant cell ,the chromosomes clump at one side of the nucleus is called synthesis or synaptic knot.