It is a homotypic or equational division that is meant for maintaining the haploid, as a result conversion of dyad chromosome into monad state and separating the two chromatids of chromosome which then become different due to crossing over. But in this stage DNA replication is absent. Meiosis was first observed in anthers of unopened flowers or buds in plants and intestine of grasshopper in animals.

Location of Meiosis: It observed only once in lifecycle. Cells that undergoes meiosis are called meiocyte.It is observed in the eukaryotic diploid germ cells of the sex organs of the plants and animals. Means oocytes, spermatocytes, microsporocytes, megasporocytes. Meiosis can be zygotic means when it occurs during the time of zygote formation or zygospore germination (ulothrix, Spirogyra, Chlamydomonus etc) or sporic means means at the time of microspore or megaspores formation (comprising bryophytes, pteridophytes, gymnosperm, angiosperms etc).

Definition of Prophase II - This is the subphages comes after interkinesis II  and before metaphase II where chromatin fibres shorten to form chromosome and nucleolus and nuclear envelope broken down.

Some important characteristics of prophase II-

2. In this phase chromosome that does not exist in pairs that is made up of two chromatids and a centromere.

3. Chromatids are remain free from each other which is different from mitotic prophase.

4. Spindle fibres of the centrioles appear at right angles to the spindle of first meiotic division at the end of this stage in case of animal cells.

6. Both telophase I and prophase II are not present in some organism and anaphase I directly leads to metaphase II. Example is Trillium. 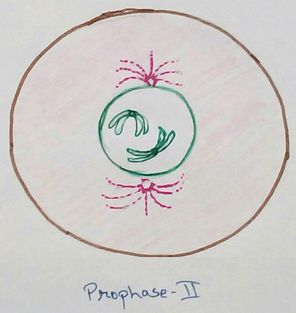 Definition of metaphase II - This subphages comes after prophase I and before anaphase II where chromosomes come to lie at the equator of the metaphase plate by the formation of the spindle fibres. 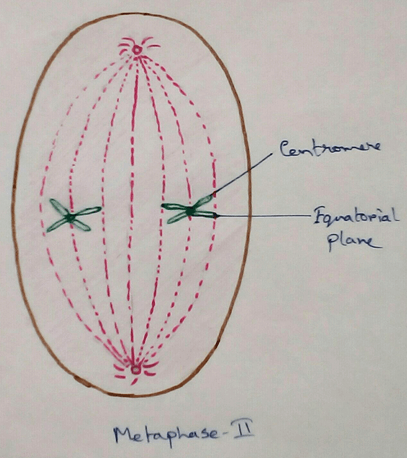 Some important characteristics of the metaphase II are follows-

1. The chromosome are arranged along the equatorial plane with the spin fibres.

2. In this phase centromere are remain attached on the metaphase plate, while the chromatids are extended towards the pole.

3. In this phase centromeres remain attached to the spindle fibres.

Definition of anaphase II - This is the subphage that comes after metaphase II and before telophase II where two centromere of each chromosome divide into two where two chromatids of a chromosome separated into two independent daughter chromosomes.

Some important characteristics of anaphase II are:

1. The chromosome divide longitudinally with the each half , where it having single chromatid and half of the centromere.

2. In this phase the separated chromatids move to the opposite poles due to shortening of chromosomal microtubules occur and as a result anaphasic movement of chromosome is being initiated. 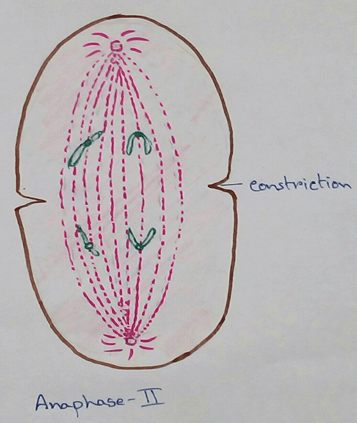 Definition of telophase II - This is the last phase of karyokinesis in meiosis II after anaphase II where the four groups of chromosomes organise themselves into four haploid nuclei.

Some important characteristics of telophase II are-

1. In the telophase II daughter chromosomes of the cell reach the opposite poles.

2. In this phase endoplasmic reticulum plays role in the resynthesis of nuclear membrane.

4. After this, in this phase four daughter nuclei with the haploid number of chromosomes are produced.

5. At the end of this phase nucleus becomes hydrated and the chromosome disappear. 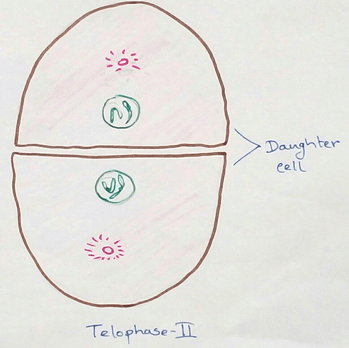 Above all of the phases described are of the part of karyokinesis means nucleus division. After the karyokinesis cytokinesis, division of cytoplasm takes place. The production of second meiotic phase are always four haploid cells with their chromosomes and is composed of both the parental combination and the of the new combination traits. So in this case traits with combined characteristics are produced. This gametes become the functional gametes in case of higher organism and undergoes sexual union to restore the original diploid chromosome status. Cytokinesis occur after each successive division or at the end of meiosis.

1. Meiosis maintains the specific chromosome number in a specific species throughout their all generation.

2. It is one and only process for the perpetuation of sexually reproducing organisms.

3. In this type of cell division recombination of hereditary units called genes of different chromosomes take place through crossing over.

4. In this type of cell division the various recombination of gene produce variations within an organism .

5. Offspring produce due to union of male and female gametes (gametes that produces due to meiosis) have the ability to survive strongly in the environment. Means it causes sexual reproduction.

6. Variations are observed due to presence of independent assortment of chromosomes, crossing over, irregular disjunction, gene mutations during replication and nicking for crossing over.

7. This type of gametes are suitable for evolution.

8. If the chromosomes are failure to separate during meiosis then it causes polyploidy .

Questions and Answers on Meiosis II:

1. What are the nature of stages of meiosis?

First division is reduction division and the second one is equal division.

From Meiosis II to HOME PAGE