First Meiotic Division - Process of meiosis is start with the interphase like that of mitosis and DNA duplication takes place at the premeiotic “S” phase. The first meiotic division consists of prophase 1, pro metaphase1, metaphase 1, anaphase 1, telophase 1. Stages are described below-

Description of the sub stages of the prophase I -

Definition of Leptotene – The substage where chromosomes appear as single thread like structures bearing chromosomes. It is the first visible stage where meiocyte together with their nuclei appear longer and prominent than the neighbouring cells.

Some important events of Leptotene-

2. Chromosome have a definite configuration ,whereas the granular chromomeres are arranged at irregular intervals along their length.

3. In case of some plant cells the chromosomes clump at the side of the nucleus called synthesis.

4. In case of animal cell, the bouquet stage or polarised stage occur due to specific orientation of chromosomes in such a way that the converged ends form multiple loops of chromosome on one side of the nucleus.

5. The divided centrioles gradually move towards the opposite poles 180° part.

6. Each centrioles duplicates into two but remain within the single diplosome. 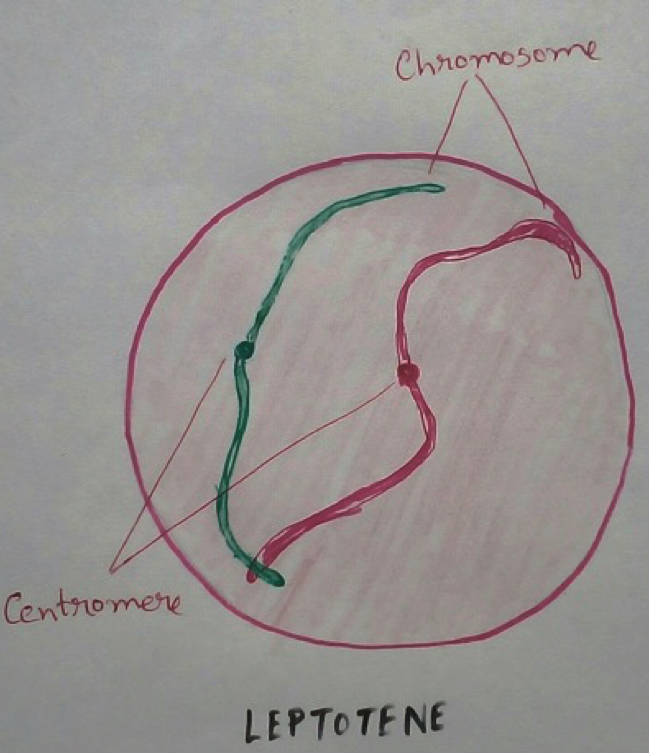 Definition of Zygotene - In this stage pairing of homologous chromosome and formation of symptonemal complex takes place.

Important characteristics of this stage-

3. Synapsis are of different types. These are -

4. During synapsis, axial differentiation occurs in between the chromosome, that is form a protein band and is termed as symptonemal complex. The paired chromosome lie on the either side of the complex which stabilizes the homologous chromosome and crossing over or recombination takes place.

5. The shortening and thickening of the chromosomes and nucleus is still visible.

Definition of Pachyneme: It is the stage in which crossing over and recombination of chromosome parts or genes between homologous chromosomes takes place. 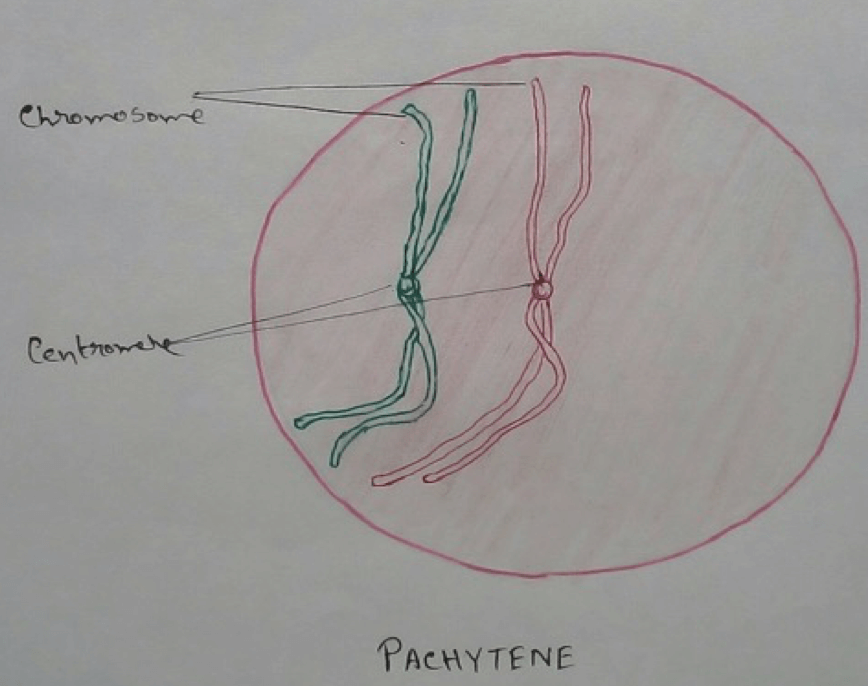 1. Bivalent chromosomes become more prominent due to continuous thickenings and shortening but they may remain in spirally twisted condition.

2. At the mid pachytene stage each homologous chromosome cleaves longitudinally except the centromeric regions.

3. Chromatids of the same chromosome are called sister chromatids.

4. The four chromatid of the bivalent is known as tetrad.

5. In this stage chromosome of bivalent remain intertwined condition.

6. Crossing over takes place at this condition.

7. The nucleus remain attached with the specific chromosome by nucleolar organisers.

Definition of Diplotene - The stage of meiosis where the non sister chromatids of homologous chromosome touch each other followed by their separation. 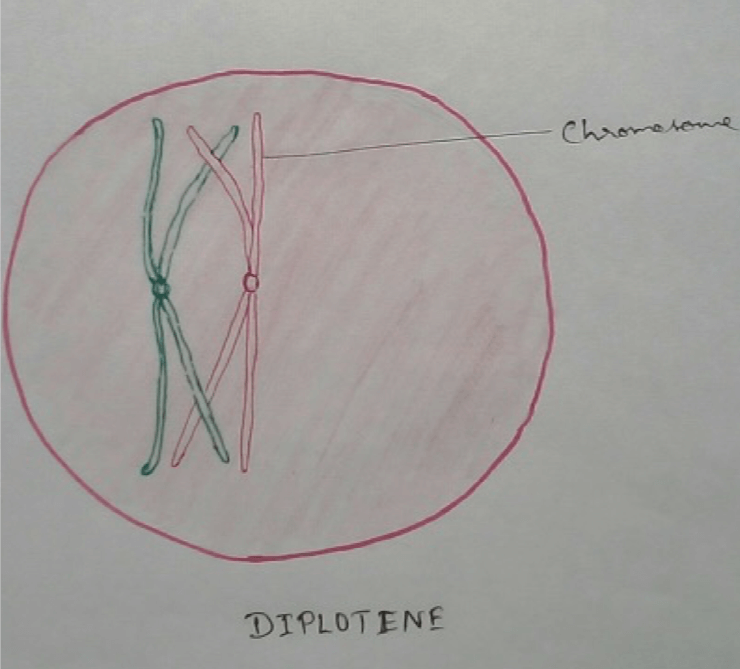 Important Events of the Diplotene-

2. It remains incomplete because in some points of the non sister chromatids remain attached and is called chiasma.

3. Chromosome become shorter, thicker and the nucleus is less distinct.

4. The terminal chiasmata when slip off from the terminal ends and it’s place is taken by the interstitial chiasma is called terminalization.

5. Number of chiasmata gradually decreases with the process of terminalization.

6. Some infolding and RNA synthesis are observed in chromatids.

7. At the point of chiasma the bivalent arms are start to rotate.

Definition of Diakinesis - In the stage of diakinesis reduction in number of chiasmata take place. 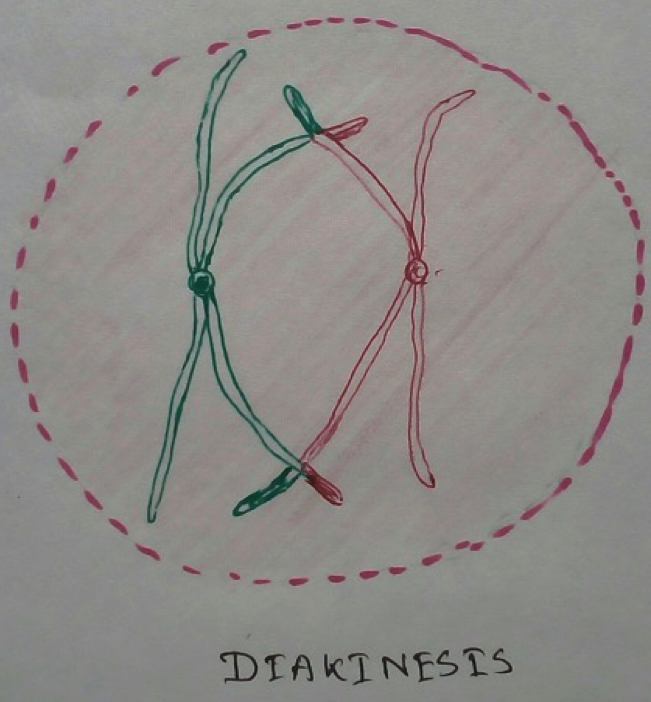 Some important characteristics of Diakinesis-

1. In this stage nucleus get detached from the nucleolar organisers of a particular chromosome and disappear.

4. At the end of this stage the nuclear membrane disappear.

Definition of Metaphase – It is the second stage after prophase I where homologous chromosome are arranged along the metaphase plate due to attachment of the centromere by the spindle.

Some important characteristics of Metaphase I are –

1. In animal cell spindle is formed between the two centrioles, as they remain 180° apart.

3. Repulsive forces between the homologous chromosomes increase which tends to separate them.

Definition of Anaphase – It is the third stage after metaphase 1 where anaphasic movement of chromosome is observed.

1. Each of the homologous chromosome with their two chromatids and undivided centromeres which is called dyad moves to respective poles by the specific process which is known as disjunction.

3. The chromosome are distinctly separated into chromatids which is united at the centromere.

4. Chromosomes of the each pole is reduced half of the meiocyte or haploid because of disjunction.

5. One of the two chromatids that remain unchanged is of parental type while the other one is changed that is called recombinant type due to crossing over.

Definition of Telophase - It is the last phase of the meiosis I where hydration of nucleus and chromatin thread disappeared.

Major events of telophase I are –

1. Chromosomes that reach the two poles and the nuclear membrane remain reorganized.

3. In this phase nuclear reticulum and nucleolus reappear.

4. Two daughter nuclei are formed on the opposite poles with haploid number of chromosome after the reduction.

5. Due to hydration of the nucleus, chromatin thread disappeared.

From Meiosis I to HOME PAGE