Definition of Cell Cycle - Cell cycle is a series of cyclical changes by which a cell passes during its growth and division.

Interphase (Phase l) - Interphase is a complex change that occurs in a newly formed cell before this is able to divide. Interphase is also called the intermitotic which is known as preparatory phase or energy phase. Before that it was known as resting phase. This interphase can be divided into three substages-. These are –

1. G1 or first growth or gap phase or pre synthetic phase or post mitotic phase - This is the longest phase of cell cycle- where cell and it’s nucleus grow into proper size. In this phase there is synthesis of biochemicals like RNA, proteins, enzymes for DNA synthesis, amino acids for histone formation, nucleotides and ATP. In G1 phase increase of number of organelles are observed. The cell reaches a state called antennae where there is abundant storage of energy as ATP is observed.

2. S phase or synthetic phase- In this phase DNA of every chromosome replicates and it is followed by the synthesis of histones. So, each of the chromosome undergoes replication producing two chromatids. This phase is also known as invisible stage of M phase as synthesis of other biochemicals also continue in this phase. Centrioles started to replicate towards the end of the S phase or beginning of G2 phase.

3. G2 phase or use Monday growth phase or gap phase or post synthetic phase or pre mitotic phase- G2 phase is a phase of cell cycle where there is intense synthesis of biochemicals and the cell organelles increases in number . Here protein tubulin are formed.

G0 Phase – This is the phase of cell differentiation where cell cycle is stopped about the middle of G1 phase due to activation of certain genes. These genes allow the cell to grow up to a particular size , assuming the particular shape and come to perform certain specific functions.

Control of Various Phases of Cell Cycle – Different phases of cell division are controlled by the cyclin dependent or cyclin independent kinase. This occurs by the phosphorylation and dephosphorylation of the proteins.

M Phase – It is the phase of cell division. According to the nature of division it can be of three types-

Amitosis - In this division chromosomes elongated and directly divided into daughter cell. 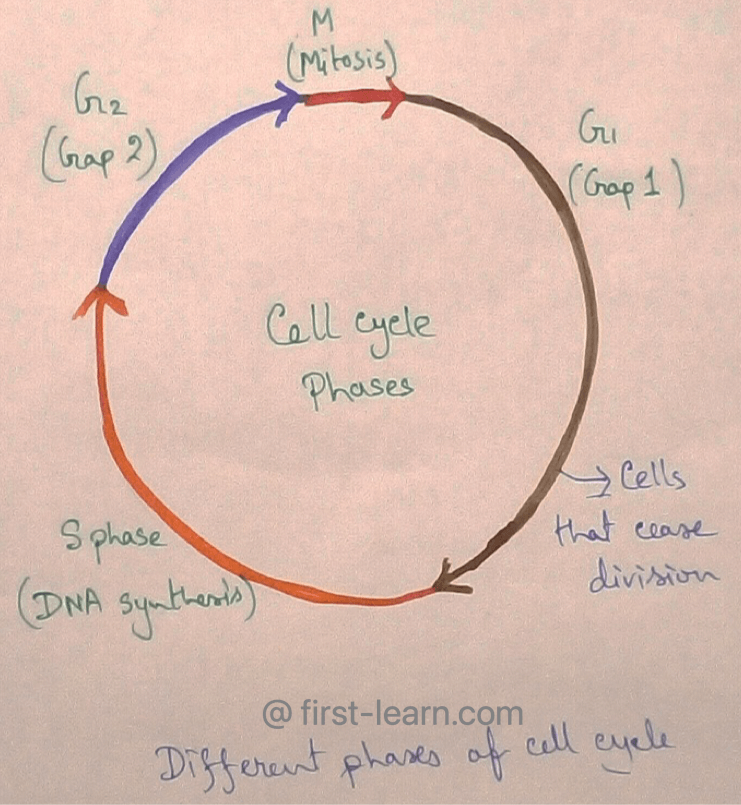 According to the area of division it can be divided into two – cytokinesis and karyokinesis.

Cytokinesis - It is the process of cytoplasmic division occurs in cell.

Karyokinesis - It is the type of nuclear division means chromosomal division occurs in cell.

From Phases of Cell Cycle to HOME PAGE