Definition of Eukaryotic Cell - It is a type of cell which contains well defined nucleus, membrane bound organelles.

Examples of Eukaryotic Cell - Eukaryotic cells are present in all higher plants and animals. It is also present in some lower animals like fungi, protists etc.

Types of Eukaryotic Cell - Eukaryotic cell can be divided into two- plant cell and animal cells according to their presence of organelles.

1. Cell Membrane - It is made up of proteins lipid protein layer means trilamillar. It provides mechanical support to the cell and covers the cytoplasm and the organelles of the cell.

2. Cellwall - Cell wall is the thick, rigid, non-living outer most covering which is present just outside the plasma membrane of plants cells are called cell wall. It is absent in animal cells. It consists of middle lamellae, primary cell wall, secondary cell wall. It’s main function is to provide shape, mechanical support, protection, intercellular connections, and control the entry and exit of different materials from the cells.

3. Cytoplasm - The fluid like substances or the semi liquid and granular part of the cell that remains extended from the plasma membrane to the nuclear membrane is known as cytoplasm. It consists of three parts. Those are cytoplasmic matrix, cytoplasmic organelles, cytoplasmic inclusions or ergastic substances. 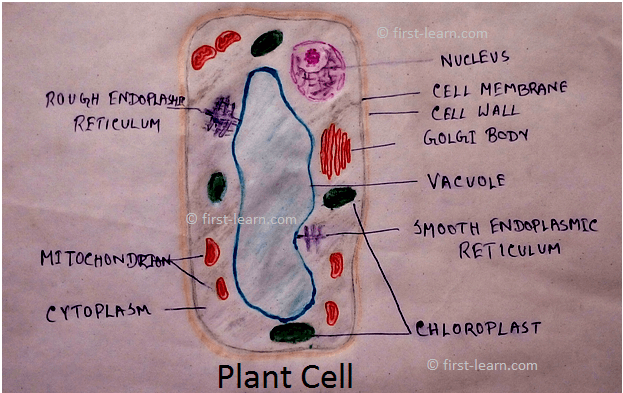 Cytoplasmic organelles are followed below:

Various metabolic enzymes are present in mitochondria,as a result it is the most important site for cellular metabolism. It is associated with synthesis of fatty acids and production of DNA, RNA, proteins. Main enzymes of the TCA cycle, electron transport chain, oxidative phosphorylation are occurred in mitochondria.

7. Golgi Body - Golgi bodies are cell organelles which are smooth surfaces, membrane enclosed organelles of eukaryotic cells which are associated with secretions.

8. Plastids - it is a cell organelles which is double membrane bound, pigmented or no pigmented cytoplasmic organelles found in plant cells which is concerned with the manufacture or storage of the food or colouration. Different types of plastids are chloroplast, chromoplasts, leucoplast.

9. Lysosome – Lysosomes are organelles that are found in both plant and animal cells that are membrane-bound vesicular cytoplasmic organelles contains hydrolytic enzymes.

10. Centrosome -  Centrosome is a type of organelles found in animal cell which is more or a less spherical mass of dense cytoplasm situated close to the nucleus and contains a pair of cylindrical bodies that are concerned with spindle formation during cell division.

12. Vacuoles - Vacuoles are membrane bound which is apparently empty spaces or cavities within cytoplasm.

13. Nucleus - It is the most important part of the cell or is the main control centre of the eukaryotic cell which is membrane enclosed part, contains chromosomes.It contains nucleolus, nucleur membrane, nucleur reticulum, nucleoplasm.

2. Protoplasm of the eukaryotic cells are clearly divisible into cytoplasm and nucleus but prokaryotic cells do not contain well defined nucleus.

3. In eukaryotic cells, nucleus is well organised and nuclear materials are enclosed without it but in prokaryotic cell it is absent.

4. Membrane bound organelles are observed in eukaryotic cells but it is absent in prokaryotic cell.

5. In prokaryotic cell nuclear materials are remain scattered in the cytoplasm.

6. Basic histone proteins are present in eukaryotic cells where the DNA s remain bound around it but is absent in prokaryotic cell.

Questions and answer of Eukaryotic Cell:

1. How many types of membrane transport are observed in cell membrane?

2. What do you mean by glycocalyx?

It is the outer covering of the animal plasma membrane which is made up of glycoproteins or mucopolysacharide.

3. Where does cell junctions are observed? How many types?

Cell junctions are observed only in some type of animal cells. It is of four types- tight junctions, gap junctions, desmosome, intercalated disc.

In some places of animal cells there are folding of membranes are observed which is finger like projections. It is mainly found in epithelial cell of renal tubules , intestine etc which increases the surface area of the membrane and help in absorption.

Cell adherence molecules are called CAMS. This are molecules which are associated with cell adhesion.

6. What are the modifications observed in Endoplasmic reticulum?

From Eukaryotic Cell to HOME PAGE