Numbers are mathematical symbols or signs that help us to measure, count, and estimate. It is a real pride for we Indians that the most used system of numeration that is the Hindu Arabic system of numeration was invented by two Indian mathematician. Aryabhat in 5th century B.C and Brahmagupta in the 6th century B.C. the four basic operation using numbers are addition, subtraction, multiplication, division.

There are various types of numbers and we need to know what those types are.

The different types of numbers are:

Whole Numbers: – Whole  are the basic counting numbers starting from 0.

Real numbers: – Any number that is written in decimal form are called real numbers. 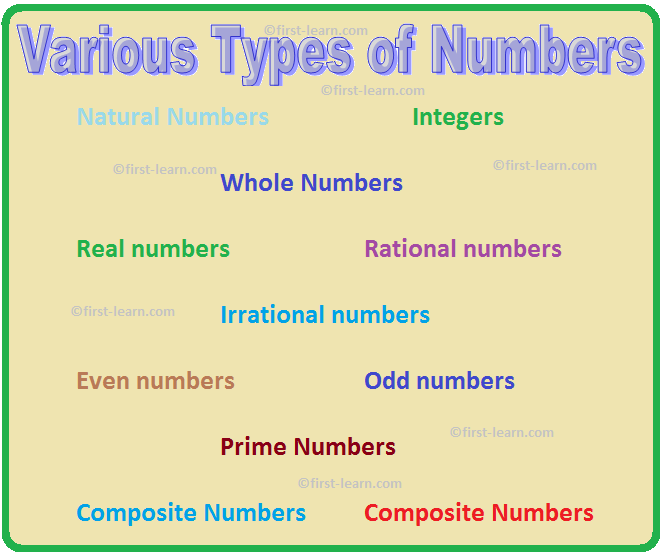 Few other types of numbers are:

Even numbers: – Any whole number that is divisible by 2 that is without leaving any remainder is termed as prime number.

Otherwise we can say that the multiples of 2 are called even numbers. The difference between two even numbers is 2.

Odd numbers: – Any number that is not divisible by 2 (that is it leaves a remainder 1) are called odd numbers.

Composite Numbers: – Numbers that are divisible by other than one and itself are called composite numbers.  These numbers have other factors except one and itself.

Co- prime Numbers: – Any  two number whose H.C.F is one is termed as co- prime or numbers that have a common factor as 1

Problems on Various Types of Numbers:

Even numbers are numbers that are divisible by 2 or can be said multiples of 2.

Like this it will go on and all are multiples of 2. More the difference between two even number is 2

Odd numbers are not divisible by 2 and do not appear in tables of 2.

From Various Types of Numbers to HOME PAGE